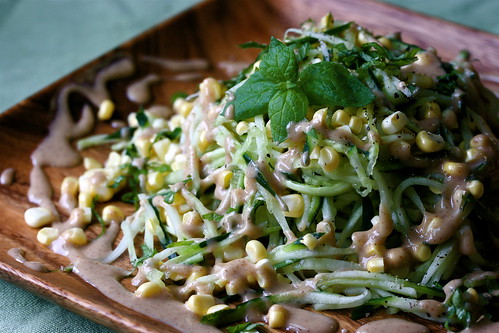 Hi! Has the dust cleared? Thank you so much for the overwhelming response to the knit night cupcakes. I don’t quite know what to say! Perhaps we should just move right along and talk about something new and totally different. Raw food.

I admit that I used to think about raw food the way that many omnis think about vegan food in general. What do you eat? Could it really be good? I couldn’t possibly make it myself – it seems too hard.

Then on a trip to San Francisco a few years ago, my eyes were opened. My husband and I went to the San Francisco Vegetarian Festival and there we tried some raw cheesecake from Alive. We were stunned. So stunned we had to find out if they had a restaurant. And they did! We went there that night for dinner.

I was admittedly nervous. Having never eaten fully raw meal on purpose, I had no idea what to expect. At that point I hadn’t even seen recipes, cookbooks or blogs about raw food. I had only been vegan for five or six months, so a lot was new to me.

We ordered a dehydrated cracker pizza starter. Stewart had a fettucini alfredo and I had a sundried tomato lasagna. We also had two tall glasses of almond milk to wash it all down. Dessert was a chocolate-y pie. How is it that I can remember every detail of a dinner I ate more than three years ago? IT WAS AMAZING! That’s how. You would think I would have delved into the world of raw food right then and there, but it’s taken me three years to decide to try some raw meals every once in a while.

So here is my very first attempt! I blended the brazil nut based sauce in a brand-spankin’ new vita-mix (thank you to my husband for that!) and used a mandoline for the cucumber noodles. I know most people use zucchini for raw noodles, but all I had on hand were cucumbers. They were very wet, so I rolled them up in paper towels while I was preparing the rest of the dish; that seemed to help the texture immensely.

It ended up being a really simple dish: cucumber noodles, fresh sweet corn kernels, the sauce, and some fresh mint and basil from my garden. I loved every single bite, and I can’t wait to make more raw food! 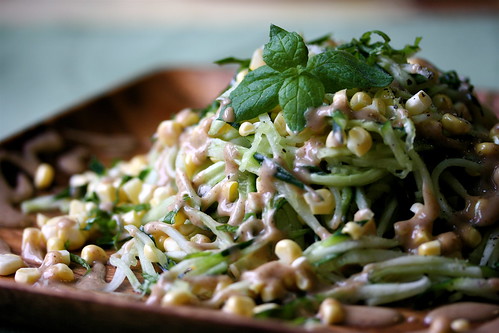