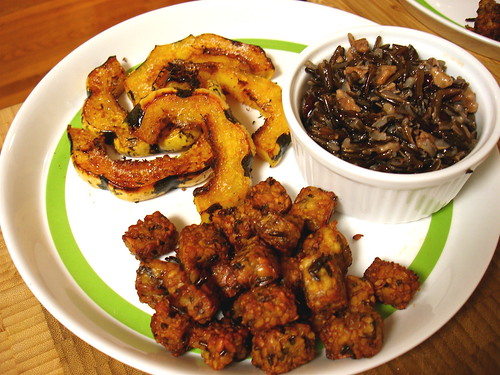 This was a “what the hell am I going to make for dinner?” dinner. We had two lovely carnival squashes sitting on top of the refrigerator. I usually cut off the tops, scoop out the seeds, dust them spices and bake them upside down in an inch or so of water until soft. When you pull them out they’re perfect containers for rice or quinoa mixed with all sorts of tasty goodies. This time, however, I felt like doing something a little different.

I ended up baking them at 375Ã‚Âº coated with spices, salt, olive oil and sugar until they were crispy-soft. The skins became thin and crispy, so we could eat the slices whole. The were in the oven for a total of an hour or so, the first 45 minutes covered with foil. I think my favorite part was the crunchy caramelized sugar on the top of each slice.

While the squash was in the oven, I decided that this was a fine night for the bag of wild rice Stewart purchased at Trader Joe’s a little while ago. One cup of rice and four cups of water went into a pot with a little bit of salt. After it was boiling I added a handful of walnuts, a handful of pecans, and a handful of dried cranberries to the pot. After about 50 minutes of cooking (perfect timing for the squash) I drained the rice, rinsed it, and made a quick dressing from mustard, maple syrup, apple cider vinegar, salt and canola oil. The cranberries plumped up beautifully, but I think that I’ll omit the oil next time.

In the last 15 minutes of cooking I frantically ripped open a package of tempeh that I remembered we had for the final part of the meal; cubed, browned, then drizzled with soy sauce off the heat. It’s so quick, it’s definitely one of my favorite ways to make tempeh. I often slice tempeh in thin slabs and use the same preparation for spinach, mayo and tempeh sandwiches. Tasty!