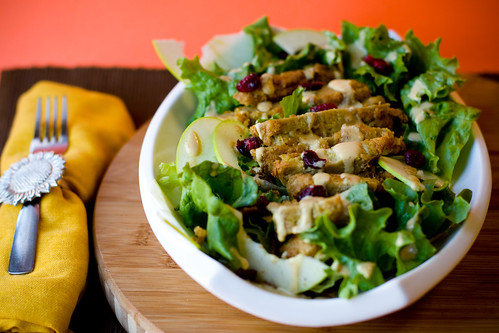 I rarely post salads. As tasty as salads can be, I want to do my part in convincing the world at large that vegans don’t survive solely on lettuce. But this salad? Whoo boy. I love this salad.

My husband calls salads like these “tossed sandwiches” and I’m inclined to agree with him. Our favorite salads aren’t just lettuce; they usually included our favorite veggies, a tasty homemade dressing, tofu or seitan, and sometimes fruit and/or nuts. We don’t make wimpy “house salads” with a few leaves of lettuce and some sliced tomatoes. Our salads are entire meals that look like they’ve exploded in the bowl.

While I think this is a perfect salad, the fried seitan is really tasty and would go great as part of a non-salad meal (with mashed potatoes and gravy? Yes please!) or shoved in a sandwich. It’s crispy and delicious and meant to resemble country fried chicken.

I’ve given directions for making the seitan from scratch (it’s not hard!), but any pre-made seitan should work. The main benefit of making it from scratch is being in control of 100% the flavoring and texture, but feel free to sub store-bought seitan if you want. It’s FANTASTIC with homemade seitan, but I bet it would still be pretty good with commercial stuff too.

The dressing is almond-based, flavored with lemon, mustard, and spiced with Old Bay seasoning. The fried seitan also relies on Old Bay. It’s a wonderful commercial spice blend that you should seek out if you’ve never tried it. You can find it at any major grocery store, and it gives the perfect seasoning to the fried seitan. The ingredients are (copied from the bottle): Celery salt, Spices (Including mustard, Red Pepper, Black Pepper, Bay Leaves, Cloves, Allspice, Ginger, Mace, Cardamom, Cinnamon), and Paprika. It’s so good.

You can make the seitan ahead of time (up to a few days in advance) and then deep-fry it when you’re ready. 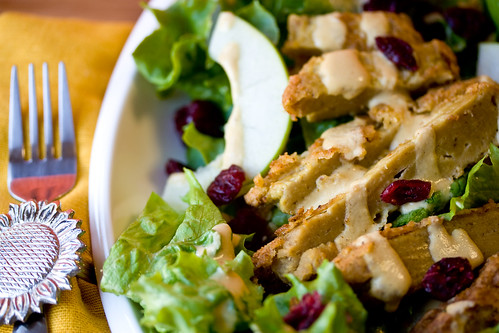 Blend all the ingredients in a high-speed blender until smooth and no pieces of almonds remain. Refrigerate until needed.

Mix the dry ingredients together. Combine the wet ingredients and stir well. Add wet to dry and knead until a dough is formed. Add more liquid if needed. The gluten will develop very quickly. Knead a few times on your counter, forming a ball. Cut the ball in quarters, forming four triangular wedges. Squish/Pound/Pull the wedges into 1/2″ thick cutlets. Take your time shaping, letting them rest if needed.

Once they’re the right thickness, put a large, high-walled skillet on medium heat, adding the water and bullion cube to make a braising bath. Once it starts simmering, add cutlets and turn down the heat and cover. It’s important that you DO NOT boil the cutlets. Check several times to make sure the broth is just barely simmering. Boiling isn’t a disaster, but it will change the texture of the cutlets, making them spongier and rubbery.

Simmer, covered for 20-30 minutes, flipping halfway through. You can now refrigerate the cutlets in their broth for later, or fry immediately. I think cutlets that have been refrigerated over night before frying have a better texture, but you can use them right away. 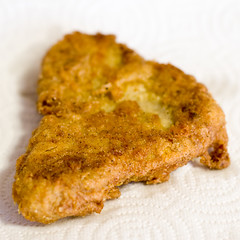 When oil is heated, dip a seitan cutlet in the wet mix coating well. The dredge the cutlet in the dry mix and gently slip it into the oil. Fry for 2-3 minutes on each side, until golden brown and crispy. Drain well on a paper towel and slice if desired.

Toss lettuce with the salad dressing and plate. Add sliced apples and dried cranberries. Place 1 sliced fried seitan cutlet on top and drizzle with more dressing. Serve while the seitan is still warm. 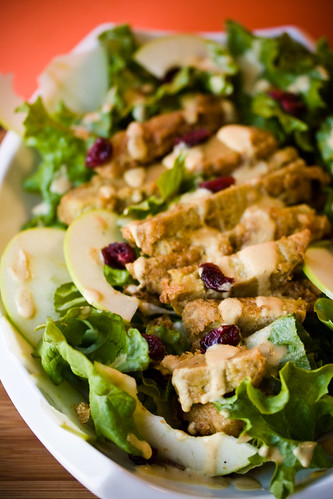