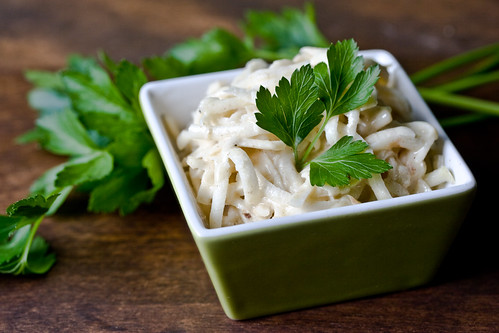 Sometimes you need to trust the classics.

Two times I found a celeriac in my possession, and two times I let it go to waste. I wanted to use it. I just wasn’t sure I wanted to eat it.

Every article I read about celeriac starts the same way: It’s ugly and unpopular, but I swear you’ll like it! It’s humble, gnarly, and caked in dirt, but just try it! It’s tough and fibrous, but treat it right, and you’ll fall in love.

Celeriac certainly has a small but passionate fan club. But even much-loathed brussels sprouts make it to the table during the holidays (I, for one, adore them), and no one has ever attempted to serve me celery root. I figured that if it actually tasted good, it must be such a pain in the ass to prepare it that it wasn’t worth the time. 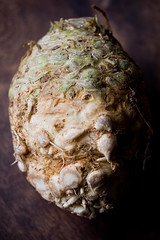 A brief rundown of celeriac: It’s a root vegetable, and it’s not simply the root of green ribbed celery, but a related plant. It’s about the size of an oblong baseball (or slightly larger), and it’s covered in twisted, knotted roots that collect dirt. The prevailing flavor is celery, but a milder, nuttier flavor than the crispy stalks provide. Some people taste notes of anise, but I didn’t detect that personally. It’s in the same family as carrots, coriander, cumin, fennel, parsley and lovage. It keeps ridiculously well in your refrigerator; wikipedia says you can get 3-4 months of storage out of it if it doesn’t dry out. I wouldn’t keep one that long, but I mention it to underscore the fact I seriously did not have an excuse for not eating the first two I had; it’s not like they went bad.

I remembered today that I had a third, fragrant celeriac taking up room in my refrigerator thanks to my CSA. Stewart was at the office, so I figured I could scrape the whole mess into the trash and pretend nothing had happened, should something go awry. All I needed was a recipe.

People use celery root in a lot of dishes (supposedly), but the classic recipe is something called celery rÃ©moulade. It’s French, and it seems to be as popular in France as cole slaw is here in the states. Since it’s easy to prepare, and widely consumed, I figured celery rÃ©moulade was a good bet. But I needed one final piece of insuranceâ€”I adapted a recipe from Julia Child. If I didn’t like celery root prepared this way, chances are I wasn’t going to like it at all.

I’ll quit stalling and tell you what I thought. Holy crap this stuff is good. It wasn’t at all bitter, and shredding and tenderizing the root changed what might have been described as tough and fibrous into delightfully crunchy. The celery flavor tasted… well… warm. If warm was a flavor instead of a feeling, it might taste like celery rÃ©moulade. The creamy Dijon dressing really brought it together, and I can’t wait to have some with my dinner. You should definitely, definitely try this out.

Place salt and lemon juice in the bottom of a large bowl. Rinse the root and remove as much dirt as possible with a brush. Using a large, sharp chef’s knife, remove the skin, cutting away the twisted roots. Working quickly (the root will discolor if exposed to air too long), quarter the root and shred finely in a food processor. Add the shredded celeriac to the bowl containing the salt and lemon and toss well, making sure all of the pieces are coated. Leave to tenderize for 20 minutes while preparing dressing. The lemon juice will protect it from browning. 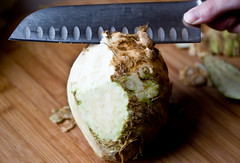 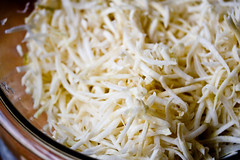 Place another bowl over a pot of warm water on the stove, warming the bowl (like a double-boiler). Add mustard and water and whisk well. Gently drizzle in the oil and whisk to emulsifyâ€”take your time so the dressing doesn’t “break”. Dribble in the vinegar, whisking all the while. Add salt.

Rinse the celery root with fresh water and dry well, rolling it in paper towels and squeezing out as much water as you can. Put it back in the bowl (dry the bowl, too) and add the dressing and toss well. Fold in the Veganaise and parsley.

You can eat it immediately, but this refrigerates well. The longer it is refrigerated, up to a few days, the more tender the celeriac gets. 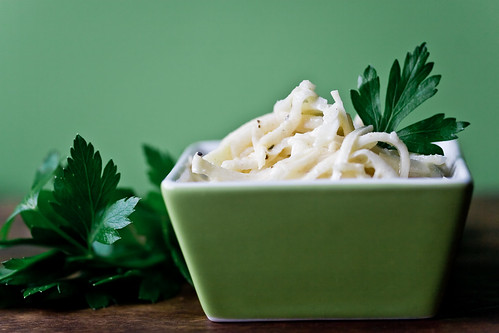