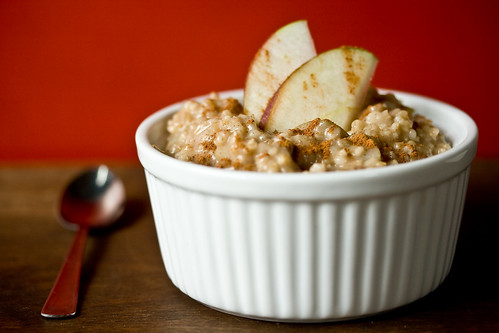 I really loved the apple and brown sugar flavor of those instant oatmeal packets when I was little. (I might even still like it now, but I’ve done my best to eliminate anything labeled “instant” from my diet.) We had an insta-hot faucet, so I could dump the powdered, sugary oats into a bowl and turn it into a snack as quickly as I could stir. This recipe is the adult version, using a fresh apple and steel-cut oats. There’s also a little dash of nutmeg, and little dashes of nutmeg remind me of donuts, which is never a bad thing in my opinion.

So let’s talk about oats. 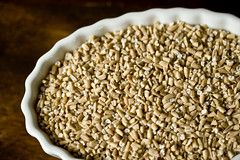 Steel-cut oats are the less processed version of the oats we’re more familiar with, rolled oats. At least, rolled oats are the oats I’m most familiar with. While rolled oats are just as much a whole grain as steel-cut, they have been steamed, flattened, steamed again and then toasted dry. A steel-cut oat is simply cut into three or four pieces and then dried. Some people say the rolled oat, being more processed, has less nutrition and less flavor than the steel-cut variety, but I haven’t found any conclusive proof of that (in three minutes of googling).

There is a clear difference between the two; steel-cut oats take much, much longer to cook than rolled oats. It can take steel cut oats up to 40 minutes to cook, compared to rolled oats which finish up in a mere 5 minutes. Steel-cut retain their texture better after cooking, resulting in a chewier breakfast than standard rolled oats provide. Some people who are really into their oats insist that the steel-cut version has a nuttier, fuller flavor. You’ll find many people willing to invest the time in steel-cut oats just for their toothsome texture and full flavor.

Keep in mind oats come in more than these two versions. You can find whole oat groats (Wow. Oat groat? That’s really the term for it?), which are the least processed and take the longest to cook. The next step down from the whole oat groat is steel-cut, then rolled oats, quick-cooking oats, and instant oats. Generally, avoiding both ends of the spectrum is the best advice. Whole oat groats take forever to cook (I think pre-soaking is even recommended) and instant oats are so mushy and formless, they’re not worthwhile when you can make quick cooking and even rolled oats in under 5 minutes.

While I’m geeking out about oats, I should mention that quick cooking oats are generally preferred for making oatmeal cookies. I read that rolled oats can be used, but the dough should be refrigerated for 20 minutes to let the oats soften up by absorbing some moisture before baking. I’ve definitely used rolled oats in cookies without doing the refrigeration trick, so feel free to ignore this paragraph entirely if you’ve got a cookie recipe that works for you.

Heat margarine in a small sauce pot that has a tight fitting lid. Add oats and toast them for 1-2 minutes, until fragrant. Add cinnamon and salt, stir well. Stir in hot water and bring to a brisk boil. Cover and turn down heat. After 15 minutes, add apple, milk, and sugar and stir. Cook for another 5 minutes uncovered, stirring occasionally.

If after 5 minutes you’d prefer your oatmeal to be thicker, cover and turn off heat and let sit for an additional 5-10 minutes. This gives the oats a chance to absorb more liquid without running the risk of burning the oatmeal. Also, the oatmeal at this point is approximately the temperature of magma, so you might as well let it cool down a bit before you dig in.

If you feel like dressing up your oatmeal, drizzle it with a small amount of molasses and a pinch of nutmeg, or sprinkle it with additional brown sugar, or add a fresh apple slice or two to the top.