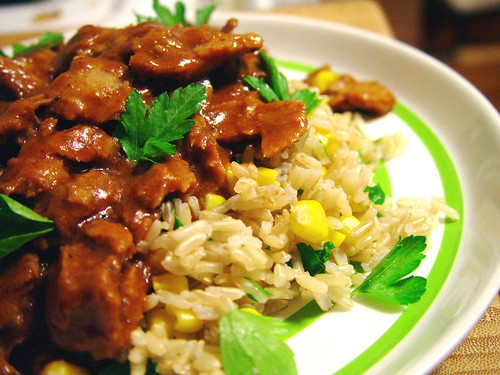 I’m not sure what prompted me to make mole. I called my mom to ask if she had a Rick Bayless cookbook laying around, because I figured if anyone knew about mole, Rick Bayless did. She said, “Oh, I don’t have his cookbook, but I know his mole takes a couple days to prepare.”

Of course it does.

I didn’t have a few days! I wanted it tonight, and I didn’t want to open a can and call it dinner.

I ended up making simpler version of Rick’s red mole, adapted by a food editor from the original, then further adapted by yours truly. Despite all this adaptation, the sauce was wonderful. Everything-all the seasonings, the chocolate, the nuts, the chillies-everything was perfectly balanced. The sauce was “fun” for me to make, which for some people translates into “a pain in the ass”, so be warned. And this is the simplier, adapted recipe, too! Once you actually make the sauce, the dinner part is simple.

One brief note about chillies. This confused the hell out of me so I hope it helps you. The name of a chilli changes once it’s dried. Mole sauce usually calls for dried poblano chillies, which are called ancho chillies. I used chipotle chillies, which are dried, smoked jalapenos. Confusing? It goes like this:

Make sense? All this time I thought they were four different chillies. Ah well. On to the recipe!

Start your brown rice. Add seitan to a 2 quart pot and cover with sauce. Simmer on low, covered, for as long as it takes to cook the rice. A few minutes before the rice is done steaming, quickly remove the top of your pot or rice cooker and pour in frozen corn. Replace top.

When the rice is done, chop a handful of parsley or cilantro. Add to rice and lightly fluff with a fork. Plate rice, spoon seitan mole over the top, garnish with more parsley and serve immediately.

* The recipe called for “mexican chocolate.” I didn’t have that (and don’t know if it’s vegan), so I used 2 Tbs Dark Chocolate, 1 Tbs Cocoa Nibs, and 1 Tbs Cocoa Powder. I don’t know why I did it that way. Do what you want. I’m sure it’ll be fine as long as it’s good quality, fairly unsweetened chocolate.

To Finish and Season:
4 Cups Vegetable Broth
About 2 1/2 tsp salt, or to taste
1 tTbs sugar to taste
3 Tbs Earth Balance

Roast the tomatoes under a broiler until blackened on more than one side. Place in a bowl to cool. When cool, remove the skins and discard. Place tomatoes in the bowl of a food processor or blender.

While the tomatoes are roasting, remove the stems from the chillies. Slice open one side of each chilli and remove the seeds and dried out inner membranes, discard. Place chillies in a bowl and cover in boiling water, let sit until softened. Drain.

Add the remaining “sauce base” ingredients to the food processor bowl (cinnamon, chocolate, bread and 1 cup broth). Blend until smooth. Remove from processor and set aside.

Add the “ancho chilli sauce” ingredients into the food processor and blend until smooth. Strain with a medium sieve. Reheat your dutch oven and add the strained chili sauce. Simmer for about 5 minutes until it darkens and thickens. Add the “sauce base” mixture that you prepared earlier to the chilli sauce and mix well. Add the remaining broth. If you blender left chunky little almond bits in the sauce, strain it again at this point to smooth it out. Add salt, sugar, and earth balance. Simmer for 45 minutes, covered, on low.