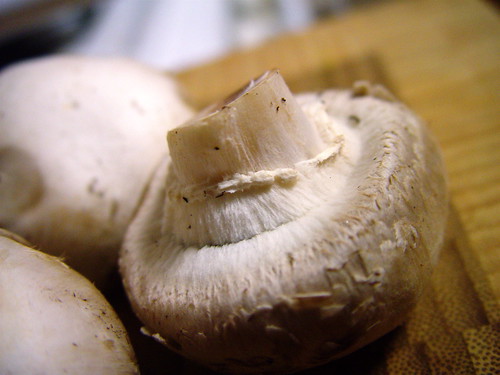 The more I learn about cooking, the more I discover how everyone has the “right” way to do something, from cooking pasta (oil in the water? do you rinse it after draining?) to prepping eggplants (peel them? salt and drain them?). Some of the techniques are actually useful, and some are just kitchen voodoo that doesn’t improve anything, but doesn’t hurt either (e.g. cold water boils faster. In what universe is that true?!).

It doesn’t surprise me, then, that everyone has their own opinion on how to clean a mushroom. Do you wash them? Soak them? Brush them or pat them or blow on them? I was always told to never soak or rinse fresh mushrooms, since they’ll suck up the water like little sponges and you’ll be left with soggy fungus. Soggy fungus? That phrase was enough to prevent me from ever letting a drop of water to touch my mushrooms

With washing out of the question, I had a hard time deciding how to clean them. I’ve tried wiping them with cloths, rubbing them with damp paper towels, and I even once bought a mushroom brush to flick away the dirt. Brushing seems to be more effective than wiping, but it’s all a pain in the rear.

One day I was in my sister’s kitchen and she did something I had never seen before.

I had never heard of peeling mushrooms! She showed me how to do it, and not only was it easy, but it also removed ever bit of dirt-ridden flesh from each and every one. It’s still a little bit time consuming, but it really gets them clean Here’s how: 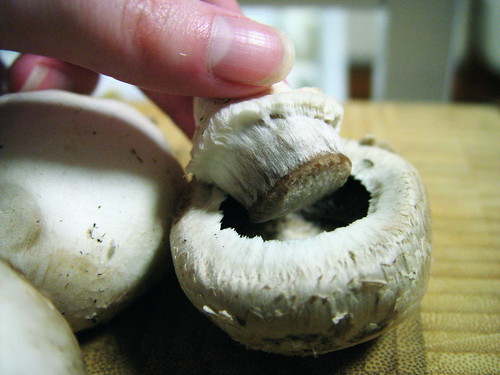 First you’ll need to remove the stem from your mushroom. This is my favorite part; it has the same appeal as popping bubble wrap. Simply press on one side of the stem with your thumb. You might need to press again on the opposite side to get a clean break. 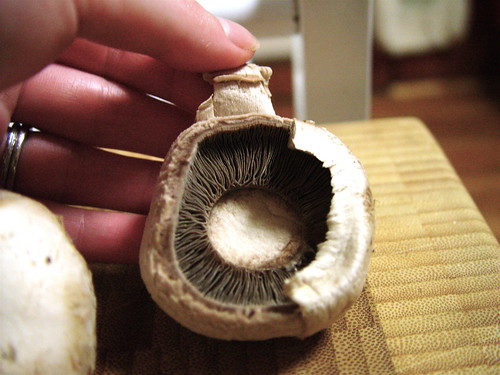 This is a picture of a mushroom that’s already half-way peeled. On the right, you can see the part of the peel that hasn’t yet been removed. It almost looks like the hem of a skirt. Simply grasp the edge of the skirt and pull to peel your mushroom, it will come off in strips. 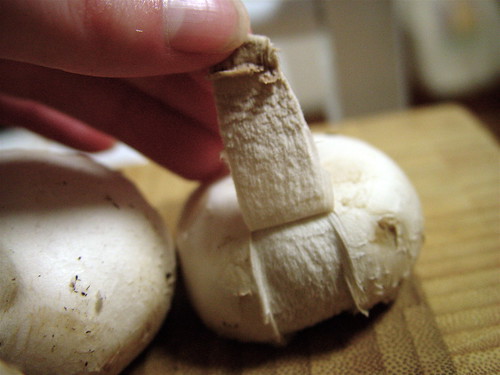 Here’s what it looks like from the top. The strip that comes off is very thin, thinner than it looks like it is in this picture. This also works on larger mushrooms like portobellos.

So, is peeling mushrooms worth it? Probably not. Doing some research for this post, I stumbled upon more than one person insisting that it’s okay to wash mushrooms! Gasp! This page says:

According to the USDA Nutrient Database, mushrooms are already 92.5% water by weight, so even if they absorbed 1/3 of their weight more, they would still be less than 95% water. In his book “The Curious Cook: More Kitchen Science and Lore”, Harold McGee describes an experiment in which he soaked 252 grams of mushrooms for 5 minutes, blotted the moisture of the surface and re-weighed them. In total, they had soaked up only 6 grams of water. Their moisture content had increased by only 1/5 of 1%!

This probably depends on how dry the mushrooms were before they were soaked. I imagine a fresh mushroom has a higher water content than one that has been cut, packaged and shipped across the country to sit in a refrigerated case for a few days before you or I purchase it. Still, there is a certain amount of logic to this. After all, don’t mushrooms grow outside? In the rain? This site says that it’s not only okay to soak them, but some varieties actually taste better after a brief salt water bath before cooking.

My new mushroom mantra is this: it’s okay to wash them. Or peel them. Or brush them. Or simply wish them clean. They’re your mushrooms, and I’m sure dinner will come out just fine no matter what technique you choose. Personally, I think I’ll be peeling when I have the time (because it’s kind of fun), but a short dip in bowl of water is most definitely acceptable.Â  Thank god.