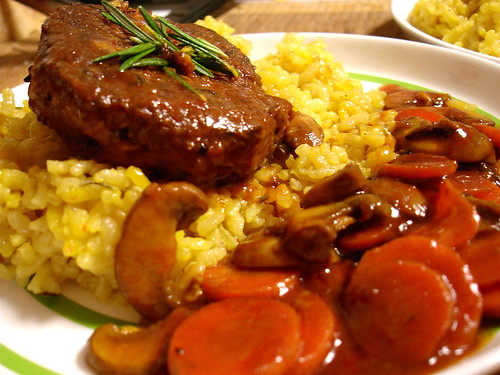 This started with a teeny, tiny, adorable glass bottle filled with saffron threads. I had never cooked with saffron before, but was always curious about it. The bottle was only $4, cheap enough for an impulse purchase. Into my basket it went.

I decided to make risotto again, specifically Risotto alla milanese, or saffron risotto. After the risotto I made a few days ago, I was dying to try a baked version. When you bake risotto, you don’t need to slave over it, stirring until your arms fall off. You pop it in the oven after a few minutes of preparation, let it bake for 25 minutes, and presto. It sounded too good to be true. I had to try it.

While reseraching saffron risotto, I found that osso buco (also ossobucco) is its traditional accompaniment. I realized I had some tempeh in the fridge and decided to have a go at “notso buco.” Considering the fact that I didn’t have this idea until the risotto was almost halfway done cooking, I think it was a success. Next time I make it, I think I’ll either use thinner slices of tempeh, or marinate them first, so that the inside tastes just as good as the outside. The sauce was rich enough, though, so it really wasn’t a problem.

I was really skeptical about the baked risotto. It called for only half of the liquid I used previously, and two thirds less time. I was expecting to check it at 25 minutes and find it bone dry and undercooked. Boy was I wrong! It was perfectly cooked, fluffy, moist, golden, and fragrant. The texture wasn’t as creamy as the stove-top version, but delightful in its own way, more like a pilaf. I definitely recommend this version, especially if you’re short on time.

Recipes below the jump!

In a medium oven-proof saucepan, heat oil over medium heat. Add onion; cook, stirring until golden brown. Add rice, and stir until grains are shiny and well coated with oil, about 2 minutes more. Add saffron and wine, and continue cooking and stirring until liquid is absorbed, 3 to 5 minutes.

Add stock, rosemary, salt, and pepper. Cover saucepan; transfer to oven. Bake until all of the stock is absorbed and rice is tender, about 25 minutes.

Remove the cover from saucepan. Dot the top of the rice with earth balance, arrange sage over the rice, and bake until earth balance is melted, about 5 minutes more. Serve immediately.

Slice the tempeh in half, making two smaller squares. Trim each square into a circular shape. No cut each circle in half to make two thinner circles (this is the step I wish I did!). Rub each piece of tempeh in oil, then coat with flour.

Heat a dutch oven or deep, heavy cast-iron skillet with some olive oil. Sear both sides of the tempeh, until nicely browned. Remove from pan. Add mushrooms and carrots and saute until beginning to soften. Add tomato paste and stir well. Add tempeh back to pan.

Add wine and cook on high until reduced by half. Add soy sauce/water mixture and boil until a thick sauce forms. When sauce is ready, turn down heat and add earth balance. Stir until incorporated. Serve.