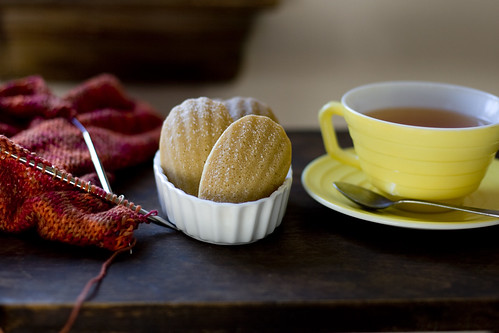 The short version of this post: I don’t have a perfect vegan madeleine recipe, yet. But if you want to experiment for yourself, these notes might be helpful. For those of you who are interested, here’s the long version:

In my last post I talked about petits fours, specifically petits fours glacÃ©s–meaning iced. I mentioned how the term petit four can refer to many kinds of small sweets. As soon as my blood sugar returned to normal human levels, I began working on petits fours secs, specifically madeleines.

Even if you’ve forgotten the French you learned in highschool (goodness knows I have), you’re probably already familar with the word sec, as in triple sec. The world sec is often used to describe a lack of sweetness in an alcoholic beverage, but in the case of triple sec it means that the alcohol has been distilled three times, i.e. triple dry. What does this have to do with petits fours? Nothing, really. Just remember that sec means “dry.” 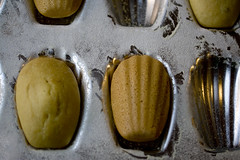 A common petit four sec is a madeleine – a lemony shell-shaped confection that hovers somewhere between cookies, cakes, and shortbreads. There is much discussion about what the original madeleines, the ones eaten and written about by Proust, were really like. Softy and crumby? Dry and sconelike? It seems that most people seem to prize the following characteristics of madeleines, so these are my goals for my final version:

1. Crispy and browned around the edges
2. Softish in the middle
3. Well defined, smooth shell ridges on one side
4. A nice “hump” on the other side
5. Slightly sweet and lemony, with buttery undertones

All recipes I’ve found seem to call for the liberal use of eggs, which are beaten with sugar to the “ribbon stage” before completing the batter. Obviously eggs are out of the question, so I’m experimenting with egg replacers and chemical leavening, but we’ll get into that in a minute.

The first thing I do when trying to create a vegan recipe is study as many non-vegan recipes on the web as I can. After getting a feel for the standard recipes in use, I usually pick the recipe that seems to be the easiest to veganize and substitute non-vegan ingredients with the vegan versions. Then I take stock of the results and change what needs to be changed, if anything.

For the madeleines, I decided to veganize a recipe I found on about.com. It only called for two eggs (as opposed the three or four that some other recipes used), and it only made 12 – I wouldn’t be stuck with three dozen if they didn’t turn out.

Melt margarine and let cool. Mix dry ingredients together. Beat ener-g eggs and sugar together until frothy. Add juice and zest to the ener-g mixture. Alternately beat in dry ingredients and melted earth balance until all combined. Grease and flour a madeleine pan and fill each shell 2/3 full with batter. Bake at 375Âº until crisp and brown around the edges (15-20 minutes).

#1 Results: Too scone-like, a little ugly, tastes okay
1. They were crispy and browned
2. They were a little dry in the middle, but not bad
3. The ridges were undefined because of poor pan flouring (see photo)
4. No hump
5. Correct sweetness and buttery undertones (for my taste) 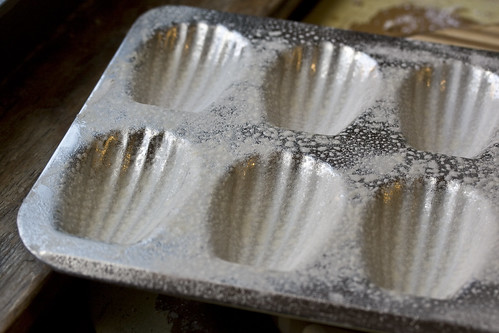 If you put to much oil on your pan, the flour sticks too well and actually fills in the ridges a little, making for lame looking madeleines. This is how the pan will look after it’s been properly floured. Use a cooking spray to oil your pan, and hold the pan a good two feet away from the nozzle. You want an even, light coating of oil which will ensure an even, light coating of flour. Like so: 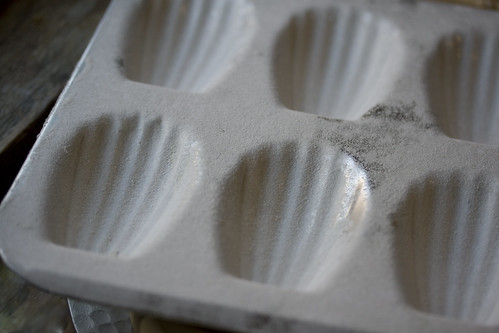 I wanted to see if I could increase the moisture content, so I tried out a modified version of a lemon muffin recipe of mine. I increased the heat to 400Âº help brown the edges and create a peaked hump. 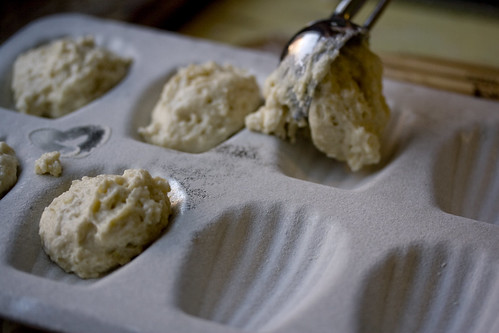 Whisk dry ingredients together. Whisk soy milk, juice, zest, oil and extract together until thickened. Fold the wet ingredients into the dry. Bake in an oiled and floured madeleine pan for 15 minutes. Remove and let cool on a rack shell-side up.

#2 Results: Total disaster
1. They didn’t brown
2. Too soft in the middle
3. No ridges, batter way too thick and bubbly
4. No hump
5. Not sweet enough

These were a disaster. It seemed I was better off with the first recipe. The batter was way too thick, creating a lot of textural and aesthetic problems. I decided to thin out the batter used above by adding 1/4 cup of water just to see what would happen: 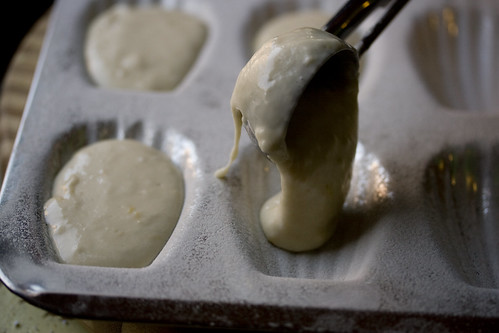 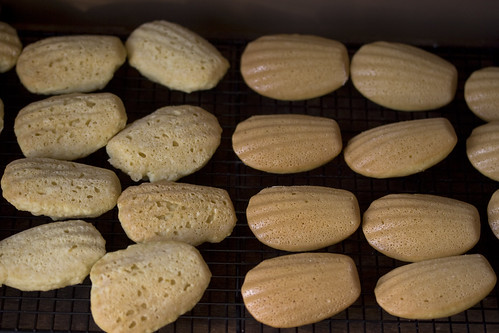 You can see trial #2 madeleines on the left, and #3 on the right. I wanted to show you how a simple thing like batter consistency can have a HUGE effect of the final result. The third batch certainly looked better, by about a hundred billion times. But how did they stack up?

#3 Results: Pretty, but that’s about it.
1. Beautifully browned
2. Texture all wrong, too much like cupcakes
3. Beautiful Ridges
4. Humps!
5. Not sweet enough 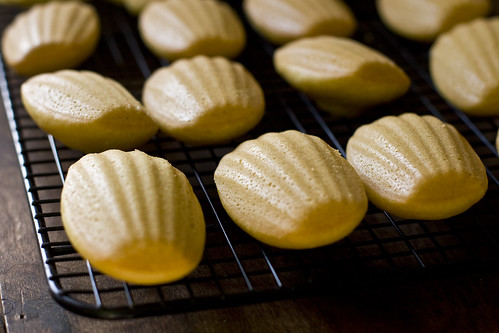 So after all that, I’m still searching for the perfect madeleines. It wasn’t until after my third try that I realized I might have had the answer all along in my petits fours glacÃ©s – the cake had these beautifully crispy and caramelized edges. If I can combine those edges with a less cake-like texture I’ll be in business. I’ll let you know the final recipe, if I ever find it….. 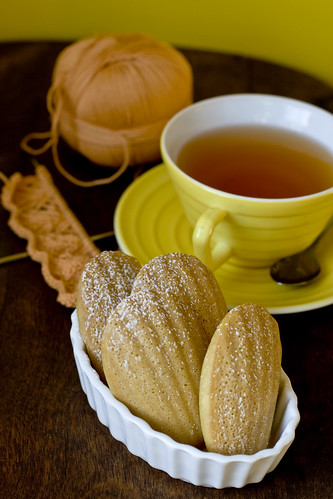