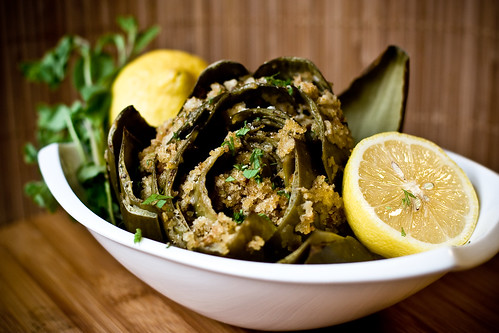 I’ve wanted to make stuffed artichokes for a long time, but the idea of prepping artichokes always gave me a dull headache. My mom used to make them all the time when I was younger, simply steamed with some melted butter. We’d fend for ourselves once we got to the artichoke heart, covered in spiky fuzz (the choke), a clear reminder that we were really eating an overgrown thistle. 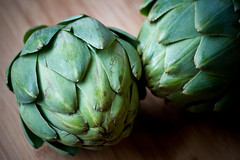 But when you stuff artichokes, it’s usually best to remove the nasty choke ahead of time to make room for stuffing, which also makes eating the artichoke a little less complicated. That way, when you get to the heart you can dig right in without getting a mouthful of fuzz.

If you’ve never eaten a whole artichoke before, let me implore you to try it, and to not eat the leaves. Well, that’s not entirely right. You eat part of each leaf, scraping off the flashy bit at the base with your bottom teeth. Or your top teeth. Just make sure you don’t pop a whole leaf in your mouth. Set an empty bowl on the table to collect the spent leaves.

The leaves start off with only a little of the good stuff on the bottom. The artichoke may seem like a tease, giving you only tiny tantalizing morsels at first, but I promise you; this is one vegetable that puts out in the end, every time. The closer you get to the center, the more edible the leaves become. You’re finally rewarded with the heart of the artichoke, and what a delicious treat that is. It’s well-worth messily eating your way towards it. 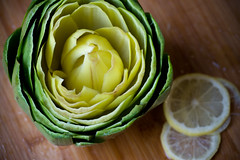 But before you can eat it, you need to prep it. There are two things you need to know, right off the bat. The first is that artichokes oxidize, turning color once the cut edges are exposed to air, much like apples and potatoes do. Keep a cut lemon nearby and rub the exposed edges of the ‘choke with it to prevent this. The second thing to remember is to keep the ‘chokes away from anything made of aluminum of iron – this will also cause the artichoke discolor. Use stainless steel knives and cookware, or anything else that’s non-reactive, such as glass. Ready? 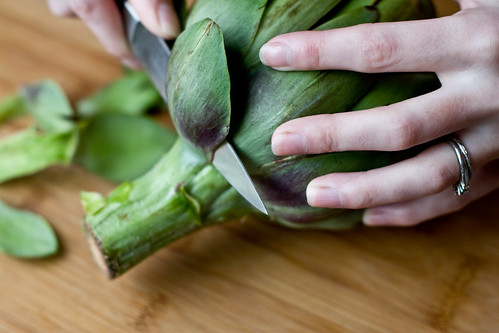 Remove the bottom few rows of leaves with a knife. These are the toughest and can be discarded. 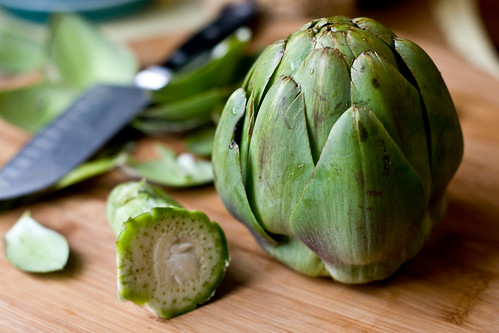 Remove the stem of the artichoke, so it can stand upright. Rub the bottom with lemon juice. 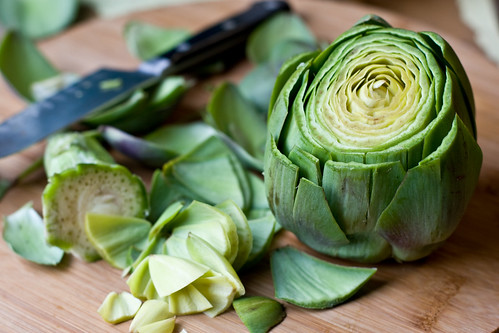 Slice the top inch or so off. It’s okay if it’s not perfectly flat. 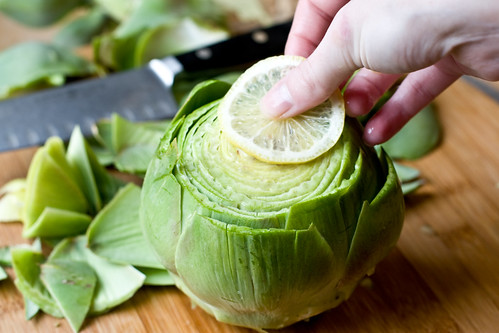 Rub lemon on the cut edges to prevent discoloration. 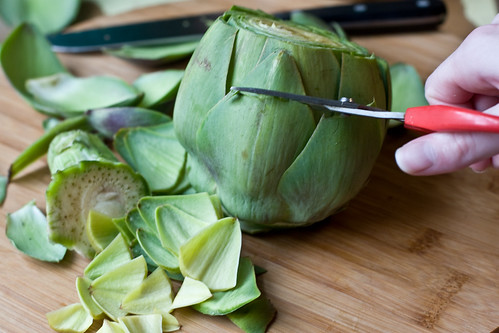 Cut the tips off any leaves that still have their points. They have sharp bits on the end that you want to remove before eating. 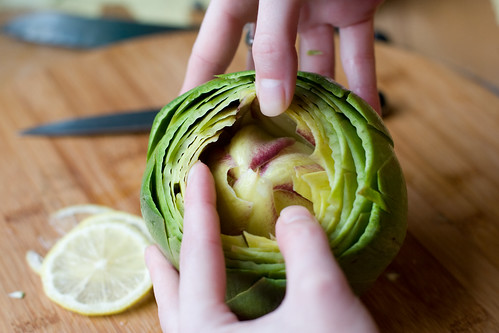 Gently spread the leaves apart with your fingers to expose the center. Sometimes the center leaves are purple as shown, but sometimes they’re just a delicate yellow. 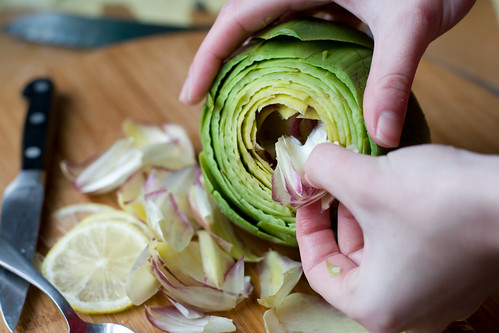 Remove the leaves, scraping them out with a spoon. The sharper the edge, the better off you’ll be. If you have a melon baller, use that. My 1/2 teaspoon measure worked better for me than a regular spoon. 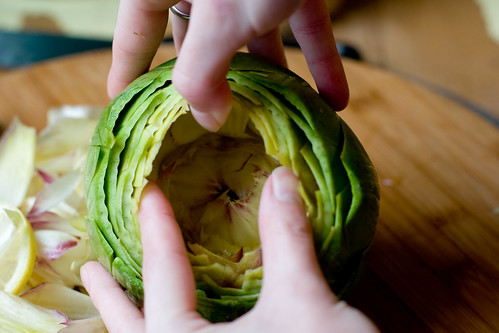 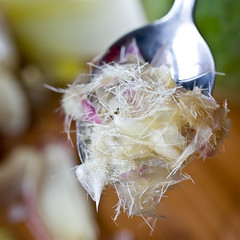 Now you should see the top of the choke, the fuzzy part you don’t want to eat. Use your spoon to scrape out the fuzzy bits out until you reach the smooth surface of the heart.

Be careful not to remove too much of the heart, as that’s the best part of the artichoke! Take your time, and be sure to sqeeze lemon juice down there while you’re working. 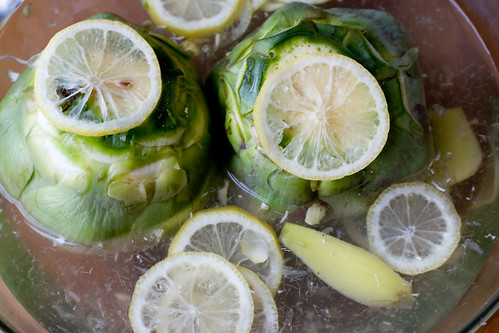 While you’re prepping ‘chokes, let the finished ones sit in a bowl of cold lemon water.

2 Artichokes, prepped as shown above 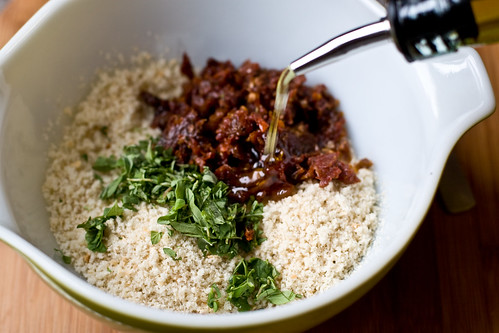 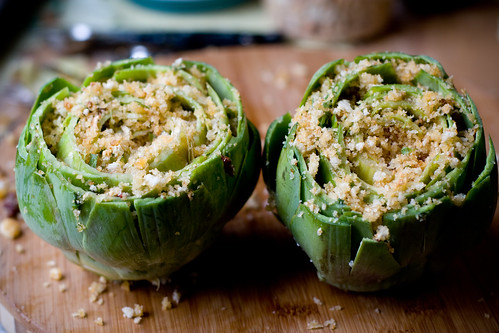 Fill the center cavity of each artichoke with stuffing. Use the remaining stuffing in between the leaves of each choke. Spread the stuffing out as evenly as you can, stuffing in as many leave crevices you can get into. 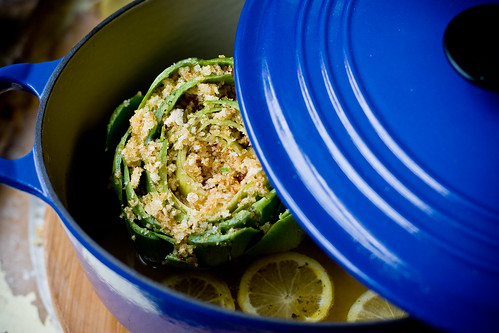 Preheat oven to 350Âº, and bake the steamed chokes for 10-15 minutes until the stuffing is crispy and browned. Serve immediately.