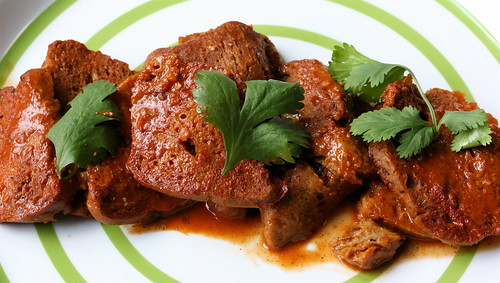 Everywhere we went in Belize, people were eating a red-colored chicken dish. One of our guides told me that red color comes from a spice mixture called recado, which contains red annatto seeds. The powder (or paste) is sometimes called achiote, which is the name of the tree that produces the annatto. Annatto is tangy and is mixed with oregano, cumin, clove, cinnamon, pepper, allspice and garlic to spice chicken in Belize and other parts of the Yucatan. 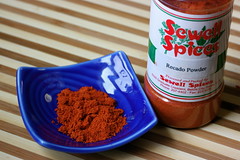 Since I couldn’t try it while I was there, I picked up a jar of recado powder at a grocery store so I could try it on some seitan when I got home. A lot of recipes call for recado rojo, or paste, instead of powder. I’m not sure if there is any substantial difference in taste between the two. The powder seemed like it’d be easier for me to transport, so I went with that. It has a beautiful red color, and I’m excited in experimenting with it more.

Obviously I have no way of comparing this to the original dish to see if it’s close, but I can tell you it’s pretty tasty, if not authentic. I’m sure traditional recipes don’t ask for tamari, but I prefer it’s flavor to salt in many dishes, so I’ve included it here. The first time I made it I found the lime juice to be overwhelming, so this recipe calls for a reduced amount. It’s delicious served with some salty black beans, lettuce, shredded carrots, and wrapped up in a tortilla. 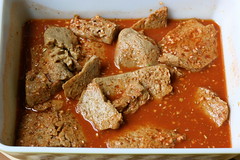 Slice the seitan into wide but thin strips. Place all other ingredients into a blender or food processor and blend until smooth. Place seitan into a small baking dish, so it is roughly in one layer, overlappng some. Pour over marinade and cover tightly with two layers of aluminum foil.

Bake for 30 minutes, but give it a shake at 15. Don’t peek! You don’t want to let the moisture escape. After 30 minutes, remove the foil and bake for another 5 minutes if it’s too liquidy. Serve immediately. 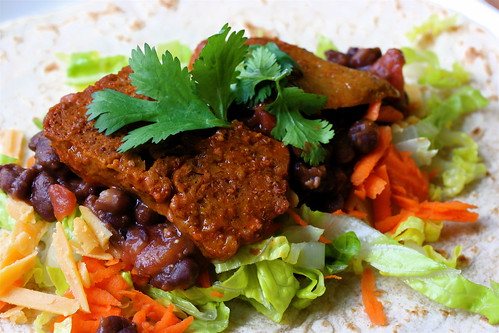