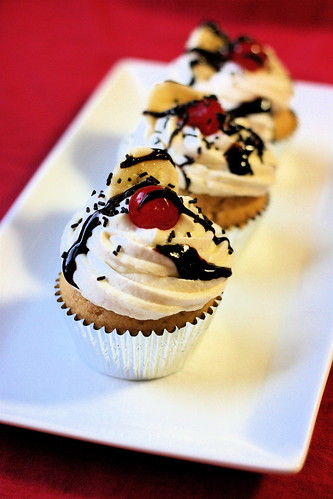 I hope my US readers had a wonderful long weekend! Summer seems just around the corner, so I’ve been thinking about ice cream. And cupcakes. And cupcake versions of ice cream. These are more recognizable as cupcakes than my last attempt at ice cream look alike cupcakes, and easier to eat to boot.

Vegan Cupcakes Take Over the World has a recipe for banana split cupcakes, but I wanted something simpler (read: I was already half-way through making my own version when I realized Isa and Terry had probably already thought of it, and lo and behold, it’s on page 81). These here are the Golden Vanilla Cupcakes. It’s my default yellow cake recipe, if you haven’t noticed.

The frosting is banana buttercream, but don’t worry, it doesn’t have any icky banana extracts in it. I hate banana-flavored things – only the real deal with suit me! If you blend a banana into your frosting you get a light but yummy banana flavor that doesn’t taste like chemical bananas. So that’s good, right?

Bake and cool cupcakes. Place chocolate chips and soymilk in a double boiler and melt slowly, whisking until smooth. Set aside. Whip frosting ingredients together until smooth and airy; use a stand mixer if available.

Frost cupcakes, add cherries. Drizzle with chocolate sauce and sprinkle with nuts, if using. Use extra banana slices or dried banana chips for an extra garnish. 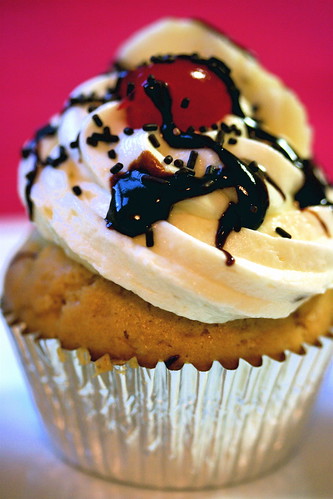