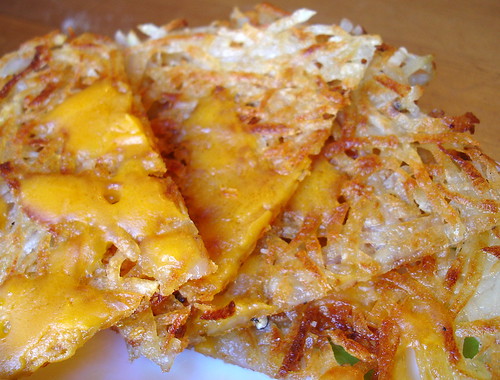 It turns out I’m a snob when it comes to hash browns. If you have strong feelings about them, I might just offend your potato sensibilities today. I’m sorry if it comes to that, but I need to fight for all those people out there who ask for a crispy hash brown, like myself. I know they’re out there!

The worst offense against hash browns, in my mind, is confusing them with home fries. Home fries have never excited me the way glorious, crispy, hash browns do. Home fries are made from chunks of potatoes. They are usually mushy, kinda slimy, and covered in a mishmash of spices, unlike their delectably lacy and crunchy cousin which are not made from chunks at all; dare I point out that they are, well, hashed?

See. I told you I was a snob about this. Relax, I’m sure you’re home fries are wonderful. I just haven’t had the pleasure of trying them.

The two lesser offenses against hash browns (but offenses nonetheless!) are 1) an inappropriate ratio between crunchy outside and soft inside and 2) general under-cooking. I have ordered hash browns from restaurants many times and had them arrive at the table sort of browned on the outside with unbelievable amounts of a soggy white mass on the inside. I end up eating all the crunchy parts and sadly digging through the rest of it hoping to find another golden bite.

After doing some research online, it seems that preparing hash browns is like curing the hiccups; everyone has their own method that they absolutely swear by. Most everyone, including myself, agrees that you need to remove excess water from the potatoes. Suggested methods include drip drying, squeezing, pressing in a ricer, and spinning dry in a salad spinner. 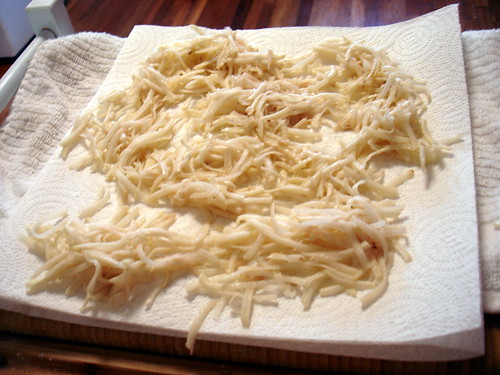 This is my preferred way to dry them. Place a clean terry cloth towel on your counter. Place two sheets of paper towels on top of that, then spread out your shredded potatoes evenly on top of that. Place another two paper towels over the potatoes, and roll the entire thing up as tightly as possible. Squeeze with all your might. Unroll and sprinkle with salt.

I should mention that potatoes oxidize quickly. If you don’t work fast, you’ll have purple brown potatoes before you know it. Make sure you have everything ready to go before you shred your potatoes, including a heated pan on your range. That way, you should be able to get them in the hot pan before they start to discolor. 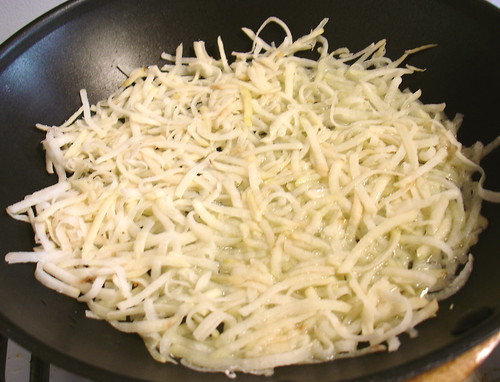 Once dry, toss them in hot pan with some canola oil. Don’t overload the pan! You actually want to see through to the bottom of the pan in some spots. Spread the potatoes out evenly and press down with the back of a spatula. Heat is key here. I find a medium or even medium-low heat works best. This will brown the potatoes fairly slowly, which is a good thing. If you brown them too fast, they’ll be raw in the middle.

Besides pressing on them occasionally, don’t touch them until you can actually see that they’re turning brown on the other side. If you try to move them or flip them too early, they won’t fuse together. If you think they’re ready to go, lift up the corner and peek to make sure. 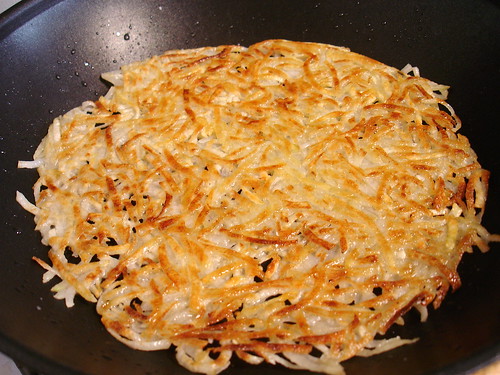 You’ll need to cook them on the other side for another few minutes. This is where I add “cheese.” Vegan cheese is notorious for many things, not the least of which is its melting capabilities (or lack thereof). I use one slice of Tofutti “American Style” cheese. If you decide to use cheese, chop it small and sprinkle it evenly over the hash browns. To help it melt, turn down the heat and cover the pan.

Once the other side is sufficiently browned, remove it from the pan and drain for a moment on a paper towel. Slice into wedges and serve with ketchup and/or hot sauce if desired. You’ll never want them any other way. 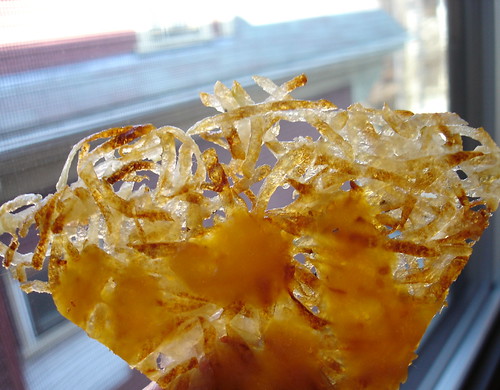