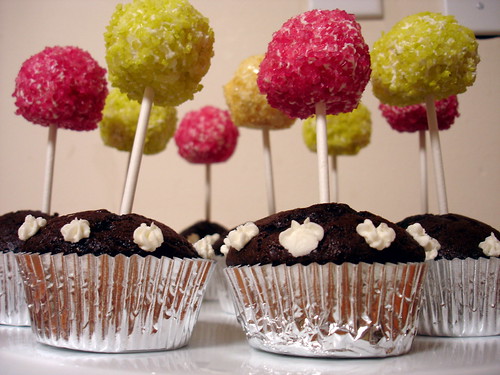 I know what you’re thinking.

What the hell are those?!

Well, you see, I had an idea. Some of my ideas are great. And then there are ideas like this one. It starts off promising, and then, well, smoosh.

So let me explain this cupcake misadventure.

I thought, hey New Year’s! Times Square… ball dropping… Count Down Cupcakes! The idea was to have a sugar crystal frosting ball suspended over chocolate cupcakes. You unwrap the cupcake, pull the stem through the bottom and voila! Your crystal ball descends and rings in the new year. You can see this to the left.

But oh, what a smooshy new year it is.

The frosting balls were really heavy, wobbling on their sticks and making larger and larger holes in the cupcakes. As they warmed they slid down their little sticks, ringing in 2007 on their own around 5:30 pm. Something had to be done, and fast.

I settled on removing the sticks and squashing the frosting balls, to make what resemble brightly colored cartoon mushroom caps sitting on top of the cucpakes. Here they are in all their.. glory… 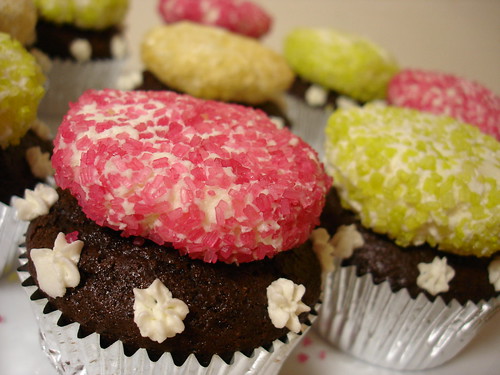