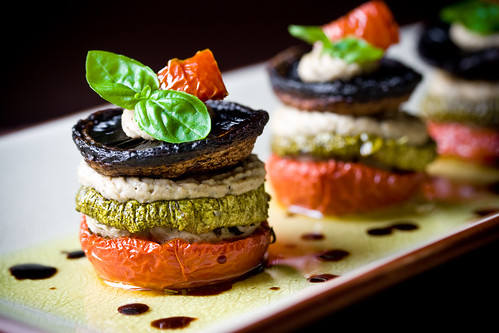 When I lay awake at night, trying to sleep, I try to create recipes in my head. I usually start with a single ingredient and turn it over and over in my mind until something clicks into place. A few days ago I was doing just this, contemplating two eggplants in my fridge. I was thinking about how difficult eggplants can be, and if I could create a recipe that would counteract some of the challenges they present.

Undercooked eggplants usually have a green taste and a tough texture that makes me sad. My favorite way of preparing them involves half a bottle of olive oil, a lot of salt, and a good stint in the oven, but that’s not always practical. When eggplant is good, it’s so damn good, and when it’s not, I personally find it gross. One of my memories from college is my geology professor turning to me and remarking that you can judge the quality of a restaurant by the quality of its eggplant dishes. (Yes, I managed to talk food even with a geology professor.) Whether or not that’s true, it does speak to what might be an essential truth:

Eggplant can be a real pain in the asparagus sometimes!

While laying in bed, it hit me. Eggplant mousse! Now, you’ll notice I’m not calling it “mousse” in the recipe. After talking about the idea with several friends and seeing them wince and make faces at the term “eggplant mousse”, I decided that it wasn’t testing well and I’d have to change the name for the blog. I don’t think eggplant creme is much better, to tell you the truth. Just imagine eggplant, cubed and stir-fried until soft and golden, the blended with cashews and herbs until a rich, creamy, yet light spread forms. It’s tasty! A lot tastier than “eggplant mousse” makes it sound.  Trust me?

I was also feeling the need to make something on the approachable side of fancy, and appetizers always fulfill that role for me.  Also, tiny food.  My ever-present obsession with teeny, tiny, itsy-bitsy food.  How tiny?  This tiny: 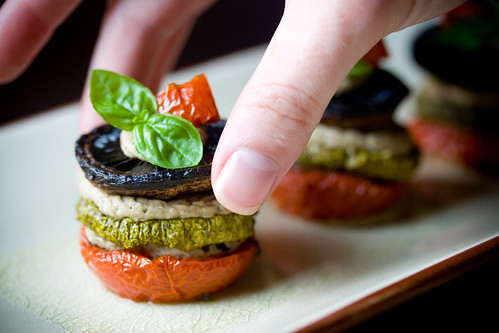 I decided to have the size of the napoleons be determined by the size of the cremini mushroom (baby portobello) caps I was using.  Plum tomatoes and an average-sized zucchini baked down to about the same diameter as the mushrooms, just as I had hoped.  You can easily make these on a larger scale with full-sized portobello mushrooms, but the tinyness of the napoleons is a real draw for me.

If you roast up more veggies than you need, you’ll have an easier time matching diameters, and you’ll have leftovers for a really tasty grilled veggie sandwich the next day.  Did I mention the eggplant stuff makes a great sandwich spread?  I’m also thinking about using it as the filling for ravioli.  But I digress.  To the recipe!

A piping bag, like the type used for cake decorating, or a plastic bag 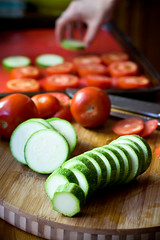 Slice the tomatoes and zucchini and place them on baking sheet; I used a baking mat, similar to a silpat, but foil or parchment will work.

Spray with oil to coat (or brush if you don’t have the spray stuff). Sprinkle with salt and pepper and herbs. Bake for 1 hour and 15 minutes, until the veggies look dehydrated and smaller, like so: 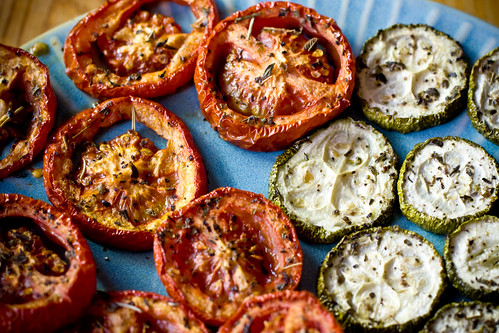 Place the mushrooms on the same baking sheet, upside-down. Fill the centers with a little tamari, no more than 1/2 or 1 tsp (I eyeballed it). They’ll look like this: 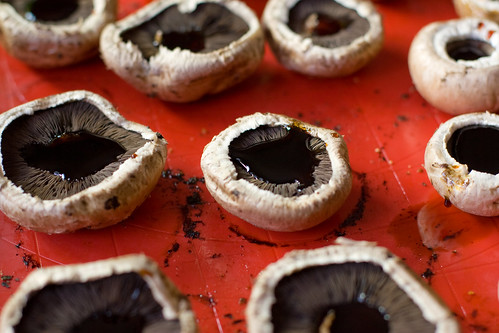 Spray them thoroughly with spray-oil and bake for 30 minutes, or until tender, at 300º F. Remove and let cool with the over veggies.

Heat a seasoned wok or a non-stick pan with 2 tbs of olive oil. Add the eggplant and saute for 5-10 minutes over medium-high heat, until very soft and browned. Add the eggplant to the work bowl of a food processor fitted with a steel blade. Add the salt, cashews, herbs and garlic (if using) and process for several minutes until VERY smooth. Season to taste, if needed, then place the eggplant creme in a piping bag or a plastic baggie with one of the corners cut off.

Assembly
Start with a little dot of eggplant creme on the plate where you want the napoleon to be. This will act as an anchor, or the tastiest glue in the world: 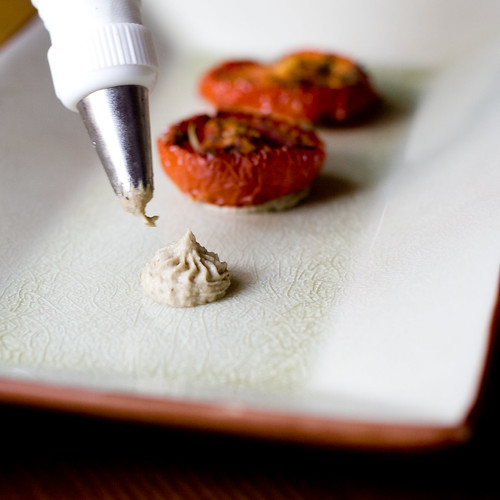 Place a tomato on top of the anchor, and pipe more eggplant creme on the top. Not too much! 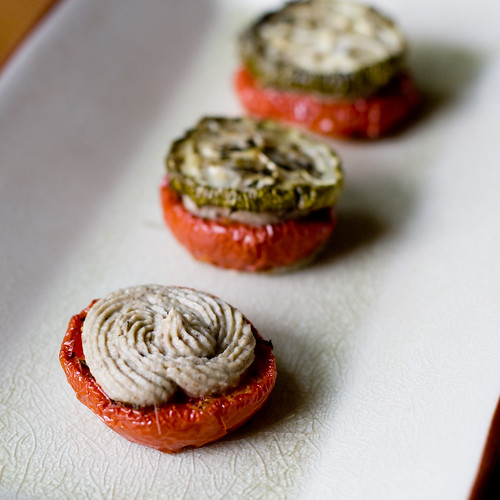 Add a slice of zucchini, then another layer of eggplant cream. Top with an upside-down mushroom cap, and place a dab of eggplant creme where the stem was: 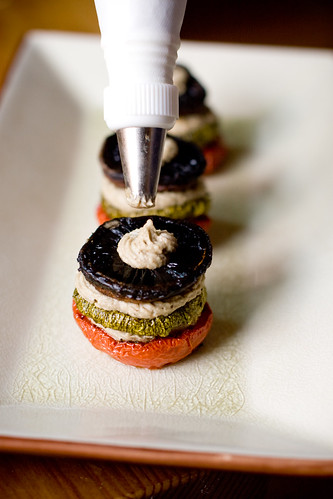 For garnish, add a small piece of roasted tomato and a basil-leaf crown. Put a thin layer of olive oil in the bottom of the dish, surrounding the napoleons. Dribble balsamic vinegar into the oil, and you’ll get pretty little contrasting dots. Serve warm or at room temperature. 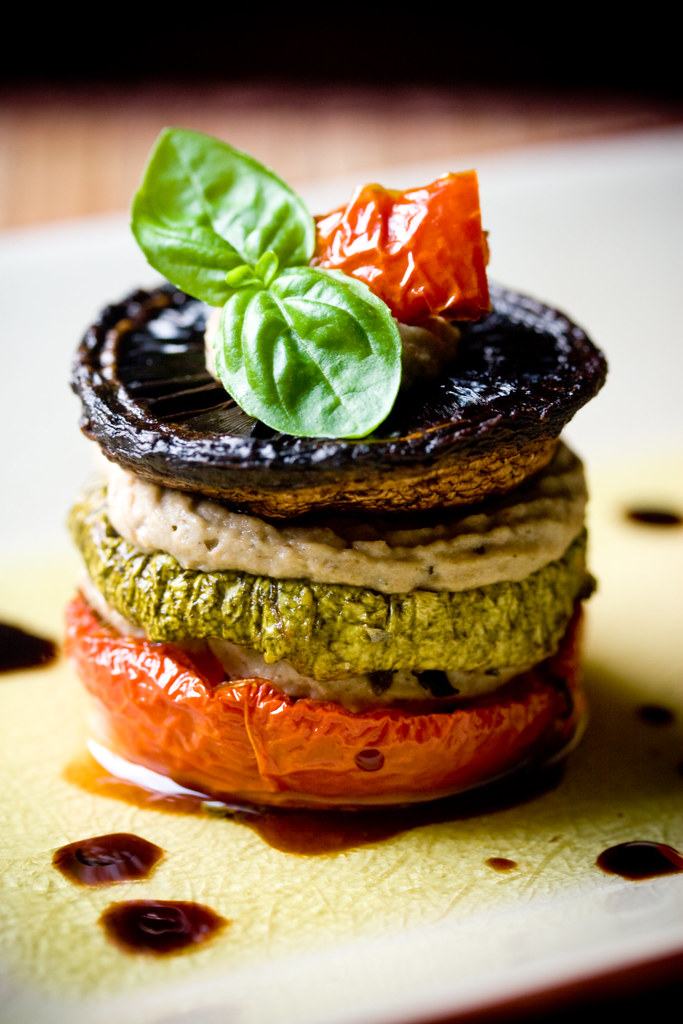