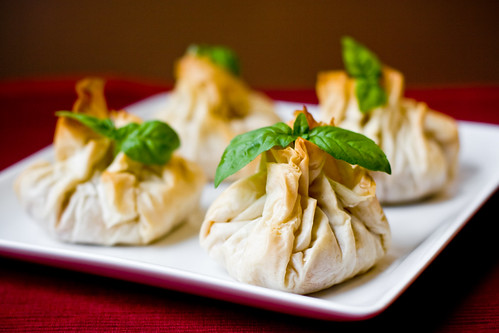 A while back I mentioned that I had found a vegan cheese that was pretty damn good. I’ve spent some time playing around with it, and I finally have a post ready for you all.

I don’t often use vegan cheese. Vegan cheese usually sucks, and I’ve found that the longer I’m vegan (just over four years now), the less I want to eat things similar to cheese (or any other non-vegan product). Now, that doesn’t mean that it’s not good every once in a while. But I don’t feel like I need it anymore. I don’t require it to be satisfied, which is a great thing.

But I’m always interested in new vegan cheeses. When I first went vegan I bought all the different brands I could find and taste-tested them. I was very disappointed. I coudn’t believe that no one could come up with a better vegan cheese. Sure, it’s definitely possible to develop a taste for some of the products out there, but they don’t win you over on the first bite. And they’d never, ever fool someone.

So when Scott from Black Duck Imports contacted me to ask if I’d like to try some Sheese vegan cheese, I was definitely curious. Surely someone, somewhere, had made some improvements on the vegan cheese front. I told him I’d be happy to try it, but I wasn’t going to mention a peep about it on the blog unless I really liked it. 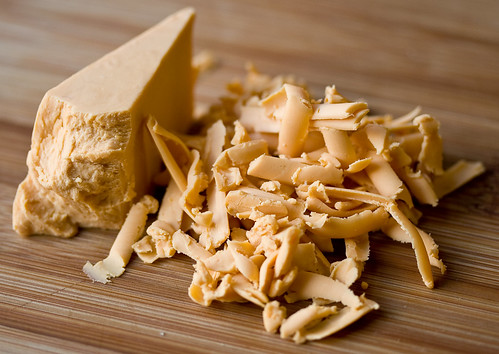 The taste, especially in their various cheddars, is great. The texture is perfect for grating, shaving, or slicing. It doesn’t feel oily or wet like some other cheeses out there. It’s very flavorful, so you don’t need a lot to flavor a dish.

The downsides? It doesn’t really melt, so it’s better mixed into something than on top of something. It comes in a wide variety of flavors, but the cheddars taste the best to me; the mozzarella is fine but it doesn’t taste like mozzarella, and I downright disliked the gouda. My favorite is the smoked cheddar. I often use a vegetable peeler to shave some off onto pasta. 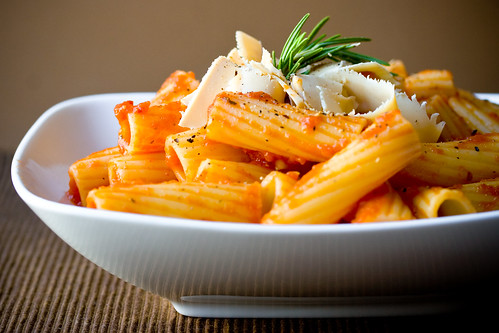 So now to the recipe. When I think I cheese I usually think pizza (a side effect of growing up in Chicago, the land of perfect pizza pie), but since sheese wouldn’t really melt all that well, I had to come up with an alternate plan. Then it hit me: if you use phyllo, you can easily put the cheese inside the pizza. Like so: 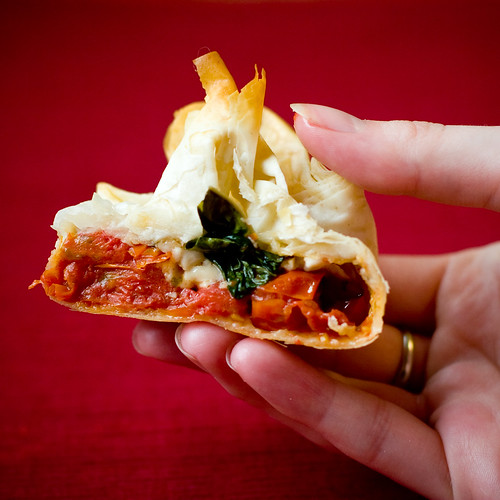 This dish makes a perfect starter, and besides the little bit of stress phyllo causes, it’s really easy. 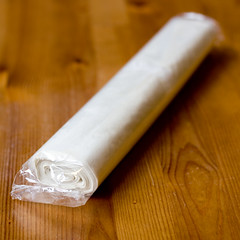 Special notes for phyllo dough: Located in the freezer section of your grocery store. Keep frozen, placing unopened package in the refrigerator the night before to defrost. Do not defrost at room temperature. Once defrosted, move dough from refrigerator to counter two hours before use. Keep any opened dough covered with a damp kitchen towel and/or plastic wrap to prevent drying. Re-wrap unused portion immediately and refrigerate for 1 week, or refreeze.

Begin by making the tomato sauce. Heat oil over medium-high heat in a saute pan and add tomatoes. Toss in oil and cook until tomatoes begin to soften and burst. Add salt and herbs. You can help the tomatoes along by popping them with the tip of a knife as they expand. Gently mash the tomatoes, but not enough to loose their basic shape. Total cooking time approximately six minutes until the sauce is ready to go. Set aside. 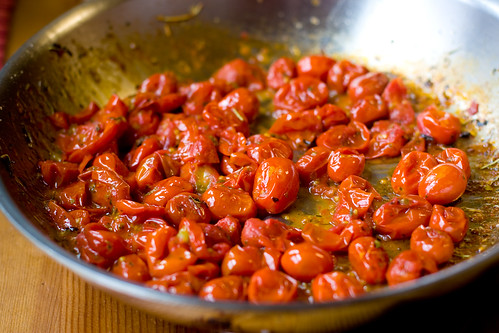 Get your work station ready with everything you’ll need (photo) to make the purses. You’ll need a large area to spread the dough out on, tomato sauce, shredded sheese, basil, melted earth balance, a brush, and a damp kitchen towel/plastic wrap.

You’ll want to open the dough, unroll it, remove 5 sheets, cover the 5 sheets, re-roll and re-package the remaining dough….all as fast as you possibly can. 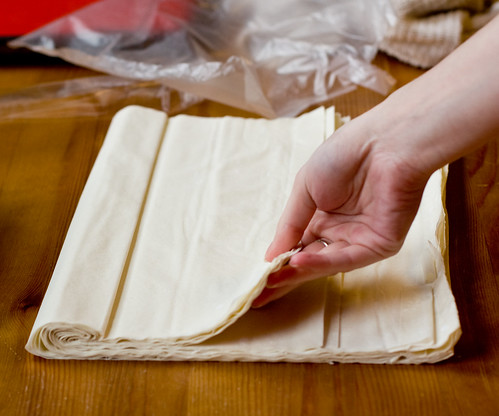 Once the leftover dough as been put away, you’ll begin brushing and stacking each of the five sheets. Always re-cover the sheets you’re not currently working with, or else they’ll dry out.

Remove one sheet from the stack of five and lay it out in front of you. Brush with melted Earth Balance, starting at the edges and working in to the center (the edges will dry out the fastest, this prevents that). If you get some rips or tears, don’t worry–it won’t be noticeable by the time you’re done. Just repair them as best you can and move on. 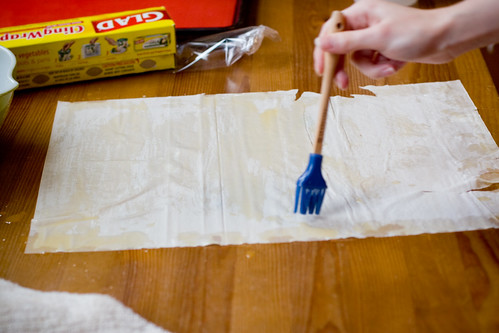 Once covered in Earth Balance, place the second sheet on top. Brush. Repeat this process until all 5 phyllo sheets have been stacked and brushed. Using a pizza cutter, cut dough into six squares (one cut lengthwise, two cuts widthwise). 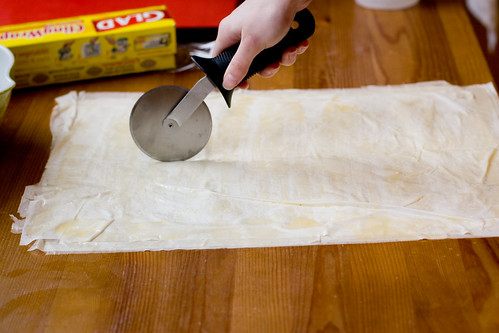 Now you can relax. The dough won’t dry out so quick now that it’s coated in Earth Balance. Place 1/6 of the sauce in the middle of each square. The add cheese and a few basil leaves. I left mine whole because I’m lazy, but you can chop yours up if you want. 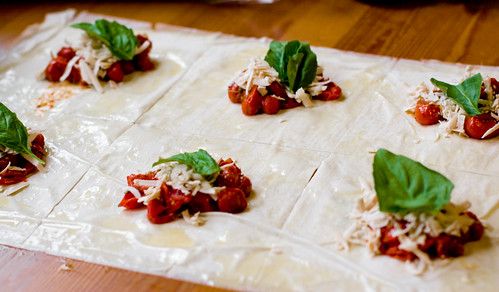 Gather the edges of the squares into the center, twisting to seal and form a purse. Place the completed purses on a baking sheet. 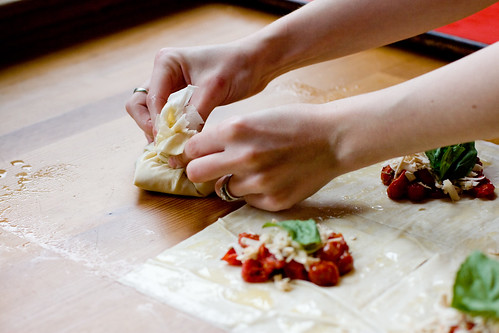 Give the purses one final brush of Earth Balance before going in the oven. 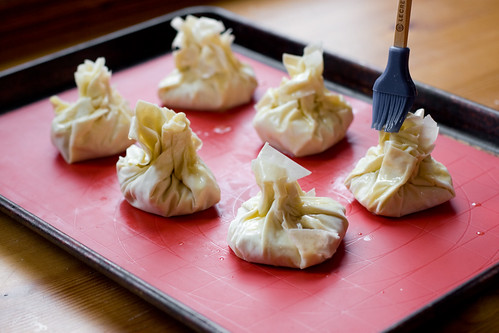 Bake for 10-15 minutes (I did 15) until the purses turn golden brown along the edges and the body feels cooked and flaky. Top with fresh basil leaves and serve warm.

Click here for more information on where to purchase Sheese. I usually purchase it online through Vegan Essentials. I hope you like it as much as I do! And hey, if you’re looking for a mozzarella that really melts, check out the newest vegan cheese on the block, Teese. I had it on a pizza in Seattle and it was great! 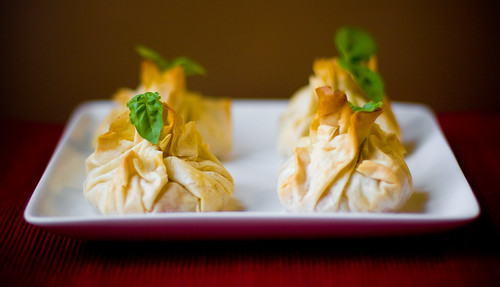