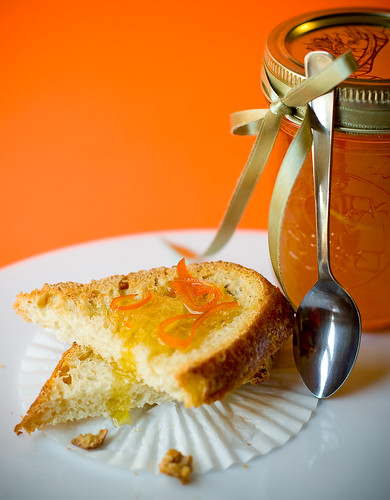 I bought some organic Minneola Tangelos last time I went to the store. When I juiced one, I was shocked. It was practically a water balloon. I couldn’t believe how much juice came out of each one. I’ve been thinking about marmalade for a while now, and here was a perfect opportunity to make it.

My mother loves marmalade, so there was always a jar in the fridge for toast or PB&J sandwiches when I was growing up. I loved the rich orange color, I loved the little wisps of rind, and I loved the “adult” flavor–sweet and bitter at the same time.

I made just a small amount of marmalade because I didn’t feel like going through the effort of canning, and besides, I only had three tangelos left. One jar of marmalade would be perfect. In retrospect, this stuff is so damn good I’m sorry I didn’t buy out the store’s entire supply of tangelos to put up as much of it as possible. But I suppose there’s still time for that!

I think my absolute favorite way to eat marmalade is on toast with a little Earth Balance margarine to balance the sweetness. I’m not generally a toast and jam sort of girl, but I make an exception for marmalade. If you only enjoy your marmalade on toast, though, you’re really missing out. It makes an excellent glaze for tofu, seitan, or veggies. It’s perfect in between layers of cake. Mix it in with ice cream, make a dipping sauce for pot stickers… you get the idea. It works equally well for sweet and savory dishes.

You can use any citrus you want for this, including lemons. Traditionally Seville Oranges are used, but I really enjoy this version made with minneola tangelos–they’re a cross between a tangerine (super sweet) and a grapefruit (deliciously tart) and have tons of juice. Use whatever citrus that’s in season and organic (no nasty chemicals on the rinds) and you’ll have a wonderful result. Here’s the formula:

I used three tangelos which was about 1/2 lb peeled fruit, so my measurements were 1 1/2 cups water, 1 cup sugar, and 50% of the zest. That produced approximately 8 oz of finished marmalade. 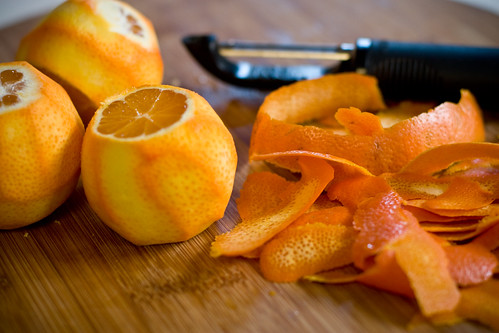 Wash your fruit well and use a regular vegetable peeler to remove the zest. Take the zest off in wide strips, 1-2″ long. Discard 50% of the zest, leaving only the pieces that are in the best condition (no discoloration, etc). 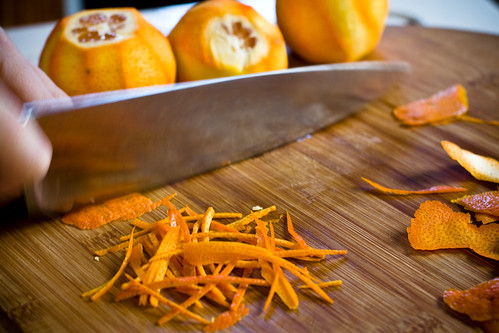 Chop the zest. I prefer to julienne it (it’s just so gosh darn pretty that way), but any kind of small cut will do just fine. 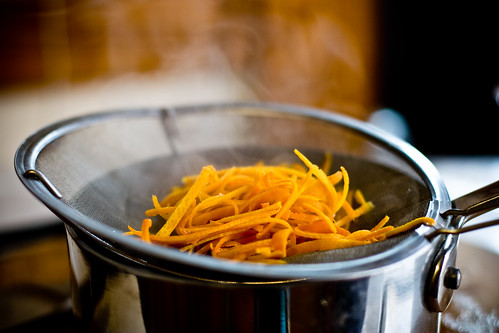 Boil the zest in water for 10 minutes, then strain. Boil again in fresh water until tender. I boiled mine for about 10 minutes after the rinse, but the time to tenderness will depend on how you cut your zest. Strain and set aside once tender. 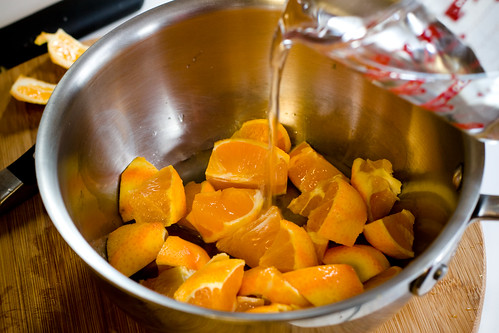 Meanwhile, chop up your fruit. You can remove the white pith if desired. I left mine on because I was lazy. If you leave yours on, too, remember that this will add to the weight. I wanted to use about 1/2 pound of fruit, so I measured a little heavy (11 oz. as opposed to 8 oz.) to account for the added weight of the peel.

Add fruit and water to a large sauce pot (you’ll need a lot of room in there, once the sugar starts to boil the volume will increase considerably). Boil the fruit and water for 15-20 minutes. You can use a potato masher to crush the fruit a bit if desired. 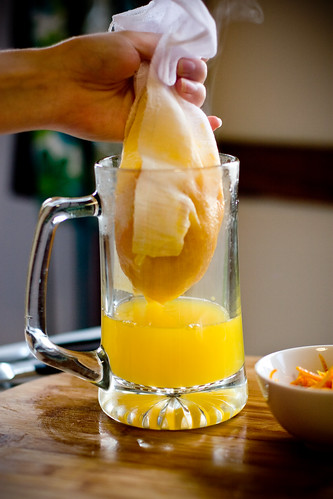 Let the fruit/water mixture sit until it’s cool enough to handle, then strain out the juice. Since I was making a small amount of marmalade, I only had 1 cup of juice after straining.

Add the juice, the zest and the sugar back to the pot. Boil for 15-20 minutes until a small amount of the the marmalade “sets-up” on a cold spoon or dish. The longer the marmalade cools, the thicker it will get. (Don’t worry if your marmalade doesn’t set up super-firm, it’s still tasty and will make a great glaze.) 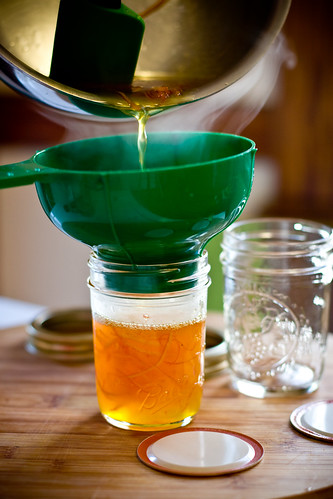 Turn off the heat and let the marmalade sit for 20 minutes or so. Then pour it into jars. If you wish to preserve/can the marmalade, now is when you’d process it in a Boiling Water Bath. Without a BW bath, the marmalade must be refrigerated and consumed within several days. For canning instructions, follow the directions included with your canning jars. 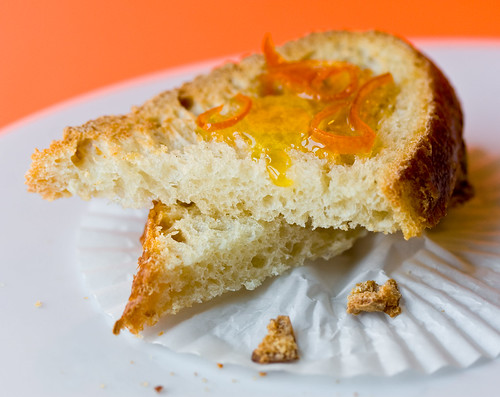