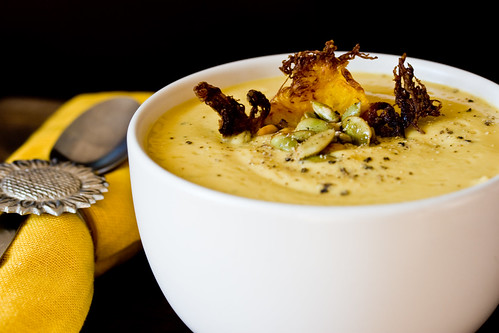 Consider the unloved rutabaga. It’s a cross between a turnip and a cabbage, two other frequently skipped-over veggies. If Frumpy and Unloveable had a root vegetable baby, it’d be a rutabaga. Like most winter vegetables, they store very well after harvesting. This means you can usually find rutabagas year round. As far as I can tell, this is why they’re unpopular.

Rutabagas were one of the only available foods during WWI in many countries, because they’re easy to grow and easy to store. They soon got a reputation as being “famine food” and many, many people had simply eaten too many of them. This dislike was so strong that even people who have never been forced to live off of rutabagas revile them. Ask someone in the US if they like rutabagas, and they will probably say no. Ask that same person if they’ve ever had one, and they’ll probably say no to that, too. 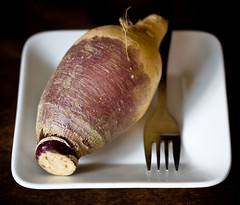 Granted, I’m sure there are people out there who have given rutabagas a fair shot in recent memory and still dislike them. But there’s no way everyone dislikes them. In fact, you might even like them! Even if you don’t know it yet.

Now I really like the word “rutabaga”. It’s fun to say. Maybe that’s why I gave them a chance. I have a theory that we need to stop calling them rutabagas if we want people to try them. But maybe it isn’t the name? Maybe everyone loves the word rutabaga and the problem lies elsewhere? I decided to do an experiment on my husband:

Me: Vegetable aside, what does just the word “rutabaga” make you think about?
Husband: A car part, like a carburetor.
Me: Hmm.
Husband: Or some kind of rickshaw.

Clearly the name needs to go.

I propose we call them what nearly every other country calls them: swedes. It seems to me that the majority of people out there who like rutabagas don’t live in the US and therefore don’t call them rutabagas. If you’re ever searching for recipes for them, search for the word “swedes” as well and you’ll get a whole different set of recipes.

Swedes can be used a slew of different ways. They’re nice boiled and mashed, like potatoes. A popular dish, called rotmos, is a mix of mashed rutabagas, potatoes and carrots, seasoned with butter and salt. You can roast them, fry them, saute them, or eat them raw. They’re generally sweet with a mild turnip like flavor, and they smell like fresh cabbage. I think they’re quite delightful.

If you’re going to give them a try, but don’t know where to start, you can try the soup I threw together today for lunch. Almost everything in it is roasted first, which gives a nice, rich flavor. I think it’s a safe way to experiment with swedes. If you’re not digging it as a soup, add some earth balance, nutritional yeast, and more salt and it makes an interesting and creamy pasta sauce. I often do that with the leftovers the next day.

Oh, and as an added bonus, this recipe is soy free! 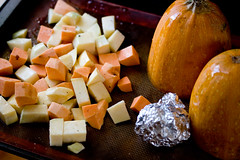 Rub squash with oil and place cut-side down on a roasting pan.

Cut the top off the head of garlic and remove the papery skin, reserving the skin on the cloves themselves. Drizzle with oil and wrap in aluminum foil. Place on the same baking sheet.

Coat the rutabaga sweet potato in oil, and sprinkle with salt and pepper. Add these to the baking sheet.

Bake for 50-60 minutes until everything is golden, soft, and well-roasted. Allow garlic to cool a bit before opening the foil package. 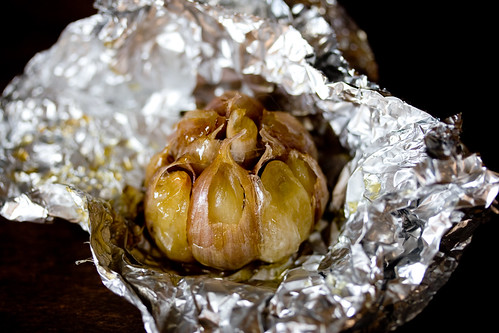 Making the Soup
1/2 Onion, chopped
Roasted Sweet Potatoes, from above
Roasted Rutabaga, from above
1/2 Cup Cashews
2 Cups water, more if needed
1 Bullion Cube
1 Pinch Nutmeg
1/2 tsp Dried Thyme
Roasted Garlic, from above, as much as the whole head if you’re brave

Squeeze the roasted garlic out of the head and reserve the paste. If you’re not using all of it, you can freeze it in an ice cube tray and add it to recipes as you wish.

Saute onion until very soft and caramelized, about 10 minutes. Blend all of the above ingredients in a high-speed blender until smooth. If you’re worried your blender will not blend the nuts completely, you can sub soy or coconut milk for the water and skip the nuts, and/or strain the soup. It’ll taste a little different, but it’ll still be delicious. Add water as desired to get preferred thickness.

Heat a small amount of oil in a cast iron pan over medium heat. Add pepitas and cook until browned. Be careful, they may pop and fly around while cooking. Remove to a bowl to stop the cooking and set aside.

Scrape out the roasted spaghetti squash into bowl with a fork. Roll the strands in a paper towel or clean kitchen cloth and squeeze out as much moisture as you can. Replace squash in the bowl, add a pinch of salt and the flour and mix well.

Heat a cast-iron pan over very high heat with some oil. Spread out spaghetti squash in a thin, lacy layer and let brown on both sides until, until crisp. Drain on a paper towel. 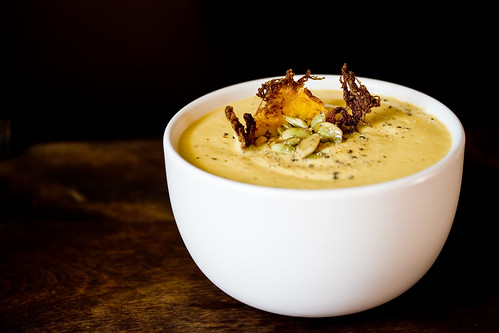