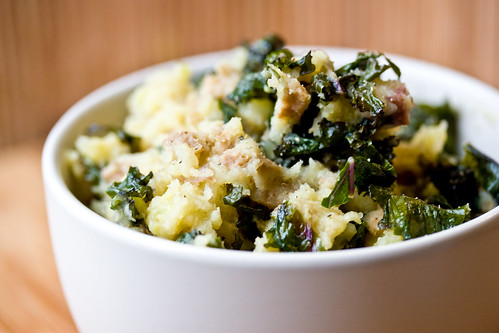 I try to sneak kale into as many dishes as I can. I didn’t eat a lot of kale in my pre-vegan days, probably because I assumed it was something only vegans eat. Now, as a vegan, I eat it all the time. I guess I was right!

Everyone should eat more kale, vegan or not. When I was trying to figure out the least painful way to add it to my diet in my first, uncertain weeks of veganhood, I decided to slip it into mashed potatoes. As if I was trying to trick myself into eating it, I cut it up really small, steamed it until it was very tender, and mixed it into salty, creamy mashed potatoes.

And it was good! Turns out I accidently invented a dish the Irish have been fond of for about three hundred years: colcannon.

Food historians generally agree that colcannon was traditionally made with cabbage, not kale. Modern recipes online will call for one or the other, so use whichever green you favor more. I always use kale.

I added little bits of seitan to this to take the place of salt pork. But just as you can make non-vegan colcannon without the pork, you can make this vegan version without the seitan. I only toss it in when I happen to have it on hand.

Colcannon
Serves Four as a side dish

Chop your potatoes into 1″ cubes and bring them to a boil in some salted water. You can peel your potatoes if you like, but I keep the skins on for added flavor, texture, and nutritional value. Meanwhile, add Earth Balance and garlic to the bottom of a pot. Cook until the margarine is melted and the garlic is fragrant, then add kale and toss well to coat. Add seitan and soy sauce and cook over medium heat until kale is tender and reduced in size. If you think it’s cooked enough before the potatoes are finished, reduce heat to the lowest setting to keep the mixture and pot warm. When it comes time to add the potatoes, the warm pan will ensure they won’t get cold while finishing the dish. 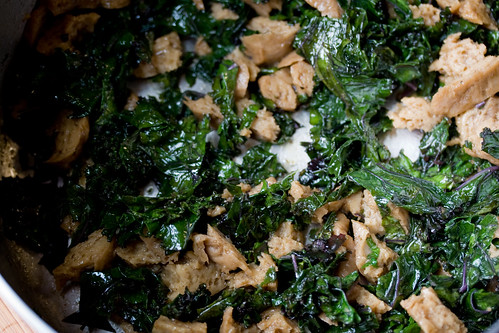 Drain potatoes when they’re fork tender but not waterlogged. Add well-drained potatoes to the warm kale and seitan mixture. Mash as you usually would. You can also rice or mill your potatoes directly into the warm pot; this prevents lumps if you worried about that kind of thing.

Mix in the nutritional yeast (if using), herbs, and 2 Tbs of the warmed soymilk. Add more if needed for a smooth and creamy texture, but not so much it loses its fluffiness. Add salt and pepper to taste and serve immediately. 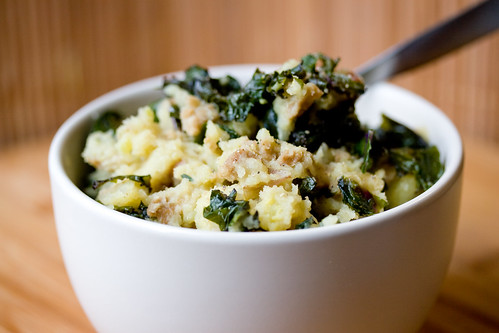