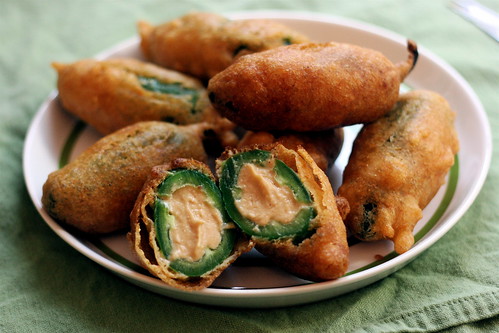 I’ve been running around trying to get a bank of recipes together for my cookbook project. I made these today, and they would have been so good had they not melted my mouth. Apparently jalapenos range from 2,500 to 10,000 scovilles, and I guess the peppers I picked up were closer to the latter. I took one bite and had to fly into the kitchen to rip a chunk of bread off the nice loaf that Stewart bought earlier today.

I ended up eating the breading off, and scooping the filling out with my fingers. Not very good table manners, but I wanted to eat them! Next time I make these I should test the heat of the peppers before I begin filling them.

I’m saving the recipe for the book/zine/whatever, but I can give you some tips on how to fill them: 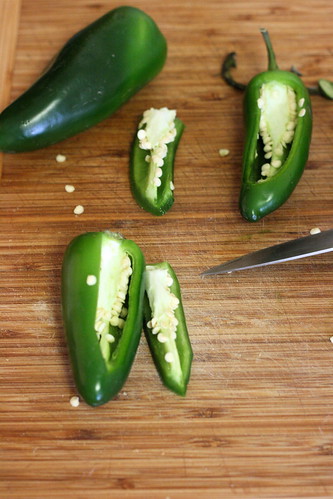 Use the tip of a sharp paring knife to cut a little door out of the side of the pepper. Some recipes say to cut the entire pepper in half, but those recipes have sticky cheese in the middle to help the pepper glue itself back together.

Again, with the tip of your knife, try to remove as much of the seeds and membranes as possible. They sort of hang down in the pepper in a cone, so if you cut the top and slide your knife down the sides, it should come out without too much fussing. Remove any membranes from the little door, too, since you’ll be using that piece.

Oh, and leave the stems on! 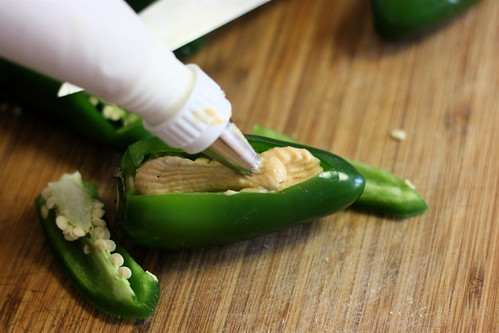 If you have a pastry bag, use that to fill the peppers. If not, a ziplock with the corner cut off will work just as well. You want to put enough filling in so that the door sticks to the pepper when you put it back in place. If a little of the filling squishes out, just wipe it off and eat it, as long as no one is watching.

They should hold up well enough while you’re covering them in batter, and once they’re fried they’ll be sealed shut. I need to go find some peppers that don’t want to kill me so I can make this again.