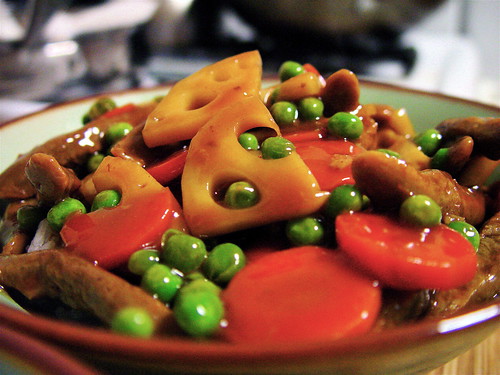 I saw lotus root at Whole Foods and couldn’t resist experimenting with it. I also picked up some LightLife Steak Style Strips. One of them was a mistake.

Vegancore had positively reviewed the “chicken” version of these strips, so I thought I might give them a shot. The store only had the “steak-style” ones, but I bought them anyway, thinking they might be alright. Even if they hadn’t been exceedingly salty (and I do love my salt), the flavor was off-putting. Not in a “these taste way too much like meat” sort of way; they just weren’t very good. Both Stewart and I ended up picking them out altogether. I don’t often buy fake meat products, and this experience reminded me why. Seitan, tofu, or nothing at all would have been much better. 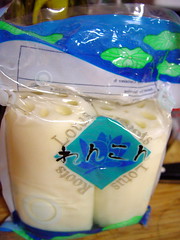 The lotus root was neat, though. It came pre-prepped in a bag filled with water. Had it not been prepped, I think I would have had to remove the skin and soak it in lemon water to keep it from oxidizing. It was really easy to use this way, I just drained the liquid, sliced it up, and tossed it in the wok.

The flavor and texture was very close to water chestnuts – crisp with a slight tang. I thought it was good in the sauce I made, but Stewart didn’t care for it. He doesn’t like water chestnuts either, so I wasn’t surprised.

Heat a wok or large pot to near smoking. Add oil, and when heated, add carrots. Cook for 2 minutes, until beginning to color. Add lotus root, and cook until carrot is just tender. Add peas, sauce, and seitan if using, heating cooking until the sauce thickens. Remove from heat and serve over rice or noodles.

Whisk together and add to any stir fry after you are pretty much done cooking it. Stir well until it begins to thicken. Turn off heat and serve over rice or noodles.

This sauce is great on its own, but it also stands up to cusomization.Â  Add orange zest/juice, fresh ginger, chilies, maple syrup, garlic – whatever floats your boat. 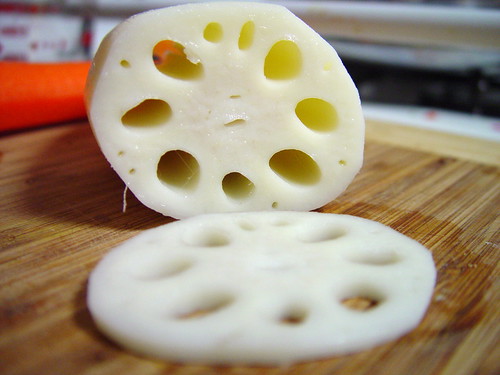