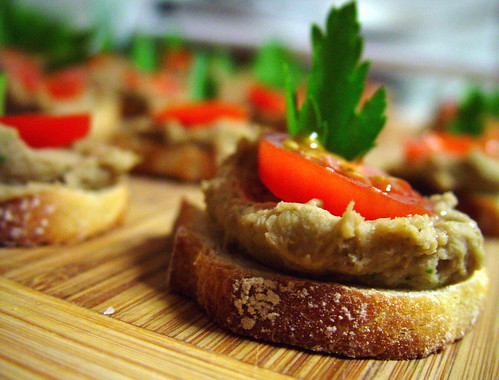 I love appetizers. They’re so small, pretty and fun to eat. Every once in a while I like to make a meal out of them as a change of pace. I won’t be able to share the recipes for some of these, as I have sworn allegiance to The Post Punk Kitchen and am helping them test recipes for their third cookbook. I have to keep quiet. Secret recipes! How exciting!

The photo you heading up this entry is one such recipe; Chestnut Lentil Pate. What I can tell you about it is that it was my first time roasting chestnuts, and it was worth the two that exploded in my oven. They’re so much sweeter than I had imagined! How is it that I had never tried chestnuts before?

Four more appetizers after the jump! 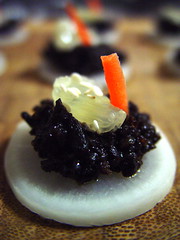 This recipe I adapted from two sources, Christina Cooks, and Cooking Light. I got the idea from Christina’s show, but followed the Cooking light recipe with the exception of the diakon rounds (that was Christina’s idea). I had never had daikon before and was totally surprised by it’s mild, sweet taste. I loved it, so I decided to use it as the base for this appetizer (instead of a rice cracker). I tried them raw and they were great, but decided to blanch them before assembling. That was definitely the wrong approach, as they lost some of their sweetness when blanched. If I were do to this again, I’d leave them raw.

The little slice of fresh lemon was a fun addition that really helped to balance the saltiness of the hijiki seaweed, which makes the “caviar” in this dish. I made the Lemon Tofu Cream that the cooking light recipe suggested, but it disappointed me. It just tasted like salty tofu that had some lemon and ginger in it, and was really soupy to boot. I ended up tossing it. Overall, this appetizer was cute and interesting, but the seaweed was pretty strong and takes some getting used to, at least for me. 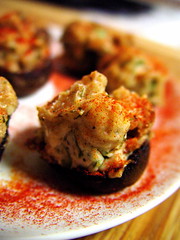 This recipe I made up on the spot, and I was really happy with it. If I had over-thought it, I probably would have ruined it. All I did was mix some vegan cream cheese with some spices, salt, parsley, and cubed multigrain bread. I stuffed it into little button mushrooms and baked it for about 30 minutes, then dusted with smoked paprika before serving. They were creamy and a little sweet – I’ll definitely make these again! The recipe is for only 8 of these little lovelies, but I imagine it will easily double, triple, quadruple or whatever you need if you’re cooking for a crowd… just taste as you go!

Mix cream cheese and herbs together until well blended. Add breadcrumbs and toss to coat. Stuff each mushroom generously and place on a baking sheet. Bake at 350Âº F for about 20 minutes until mushrooms is dark, soft, and is moist around the bottom. Dust with paprika before serving. 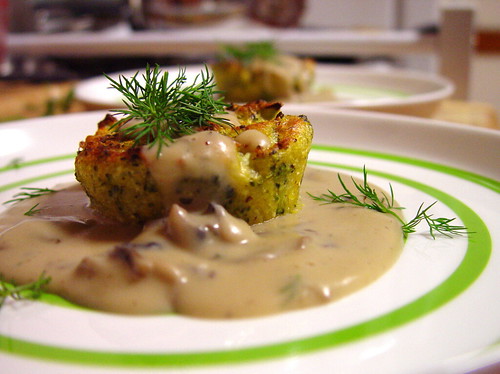 The Broccoli Polenta is another top secret but tasty test recipe, but the sauce is mine so I’ll share the recipe for that!

Saute the mushrooms in the olive oil until soft. Remove from pan. Melt earth balance over a low heat. When completely melted, whisk in flour to form a roux. If the earth balance is super hot, the flour will cook immediately when it hits the fat and form little lumps. You can avoid this lumpiness by making sure it’s not too hot when you add the flour.

Add all the spices to the roux and combine well. Slowly add the soymilk in, whisking to incorporate. Add tamari. Turn heat up and whisk until sauce is thickened. Serve immediately. 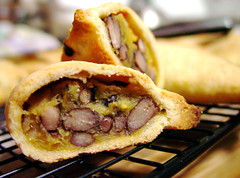 The last test recipe I’ll share with you are these empanadas. An empanada is basically a stuffed pasty. They can be filled with all sorts of things, and this particular filling of black beans and roasted acorn squash was divine. They also make great finger food for parties, I took mine to a superbowl bash and everyone ate them right up, almost to the point of fighting over the last one! 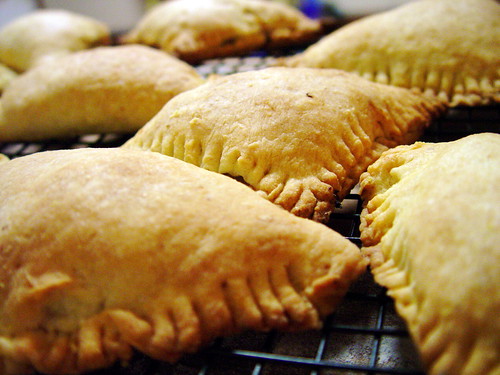 That’s a lot of appetizers! If you’re planning a party in the future, I hope this gives you some ideas. If you love appetizers as much as I do, though, you shouldn’t ever wait to throw a party to have them.