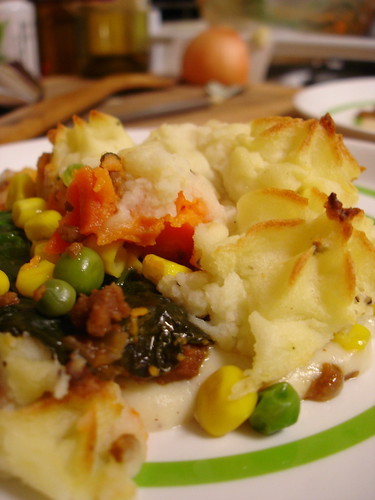 Quick update with dinner, as we actually haven’t eaten it yet. It’s in the oven while we await another friend to join us last minute. Unfortunately, it completely fell apart when I plated it, so this was the best shot I could get.

Here’s what it looked like before I destroyed it: 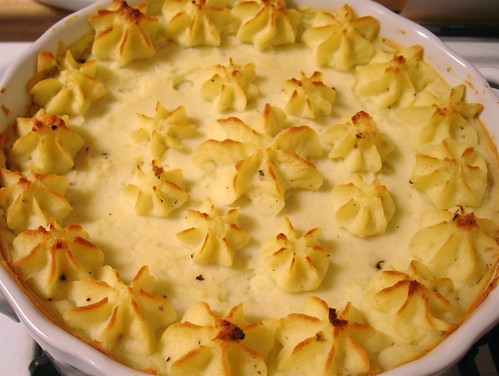 Our second guest should be arriving shortly, so perhaps I should get off the internet. See below for more about how I made the Shepherd’s Pie.

This turned out quite lovely. I realized it’s sort of hard to tell what the filling is, so here it is, from the top down:

It was baked in a 350Âº oven until the potatoes started to brown. Since everything inside is pretty much cooked (except the frozen vegetables that thaw almost immediately and the spinach what will wilt if you look at it funny), you really only need to heat the whole thing up and brown the top. Have a glass of wine or something while it bakes.

Each slice (can I even call them slices?) was served on top of some vegan bechamel sauce. The internet seems to be populated by a single vegan bechamel recipe that calls for cashews – it may taste lovely, but in my mind that just complicates the recipe needlessly. You need to blend the cashews up, and my non-vitamix blender would probably leave a bunch of cashew bits in the sauce. Who wants a lumpy bechamel? Now you’re straining hot sauce, making a mess, and frustrating yourself. The following recipe is what what I use; it’s much simpler and doesn’t require any blending:

Vegan Bechamel
2 Tbs vegan butter (Earth Balance)
2 Tbs flour
1 Cup soymilk
1 pinch nutmeg
1 pinch salt
Pepper to taste (white if you have it.. but who has it?)

Melt the butter in a sauce pan on medium heat. Add the flour and whisk to form a roux. Whisk until the color of the roux darkens (it’s subtle and doesn’t take very long, so the directions could also read: whisk until you don’t want to anymore. It’ll be fine.).

Add the soymilk slowly, whisking as you go, making sure there are no lumps. Whisk until all the soymilk is incorporated, then add the nutmeg, salt and pepper to taste. Go easy on the nutmeg, it’s stronger than you may think!

Remove from heat when the sauce is sufficiently thick – it should coat the back of a spoon. Serve.